VAN DYCK’S PORTRAIT OF A WOMAN & THE BACON CUP

A rare opportunity for the Ashmolean

This portrait of a wealthy young woman with her little dog is an early work by Anthony van Dyck (1599–1641), signalling his ambition and brilliance. The painting has been on loan here for over ten years – there is nothing else like it in the Ashmolean.

We have an opportunity to acquire this portrait and some outstanding English silver, including the superb silver-gilt cup made for the politician, Sir Nicholas Bacon during the reign of Queen Elizabeth I. This rare piece of Tudor silver will transform our collection.

HOW YOU CAN HELP

The total value of these works is around £15 million, but with the UK government’s Acceptance in Lieu (AIL) scheme the Ashmolean can acquire them if it raises just £500,000. We still need to raise £115,000 over the next 6 months to achieve our goal.

We are seeking support to ensure these important works are saved for the nation, so that they can continue to inspire visitors of all ages for many years to come.

For further information about how to support this acquisition, please contact the Development office:

PORTRAIT OF A WOMAN

Anthony van Dyck (1599-1641) was one of the most important Flemish painters of the 17th century, after Peter Paul Rubens. An incredibly talented portraitist, his painting ‘Portrait of a Woman’ is an ambitious early work, presenting a richly dressed woman adorned with fine jewellery.

Painted around 1618-20, the portrait is a wedding portrait and the companion piece of her husband, now identified as a member of the Vinck family of prosperous Antwerp merchants who traded in luxury goods, has survived too.

The two portraits were only separated in 1829 with the male portrait now in the Koninklijk Museum voor Schone Kunsten, Antwerp.

The couple are rare examples of full-length portraits by Van Dyck in his First Antwerp Period (1618-1621) before he left for England and Italy, a format usually reserved for royalty and nobility. 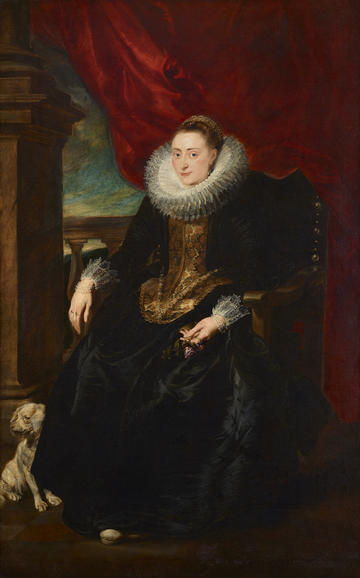 The Cassel Silver group is made up of 9 outstanding pieces of 16th-18th century silver, including the celebrated Bacon Cup and a selection of other remarkable silver including ‘The Blacksmiths’ Cup’ - a Commonwealth silver standing cup - and a pair of 17th-century silver-gilt ginger jars and covers.

The silver gilt cup and cover, known as the Bacon Cup, is one of three made for English politician Sir Nicholas Bacon (1510-79) from the Great Seal of Queen Mary I of England and her consort Philip II of Spain. The cup was made by Affabel Partridge, goldsmith to Queen Elizabeth I and one of the foremost London craftsmen.

The bowl of the cup is engraved with the arms and motto of Sir Nicholas; the family crest, and a boar – a pun on the name Bacon – forms the finial, hence the ‘Bacon Cup’. The cup is amongst the few surviving examples of late 16th-century London hallmarked silver and, with its connections to the Courts of Queens Elizabeth I and Mary I, is a historically important work which perfectly demonstrates the goldsmiths’ art of the Tudor period.

The Bacon Cup is part of the remarkable collection of Sir Ernest Cassel, a German-born banker who, after emigrating to the UK in 1869, rose to become King Edward VII’s financial adviser and trusted friend. Cassel was a pioneering collector of historic English silver and his exceptional collection was comparatively little known in his lifetime. However it was later recognised for its rarity, splendour and importance. 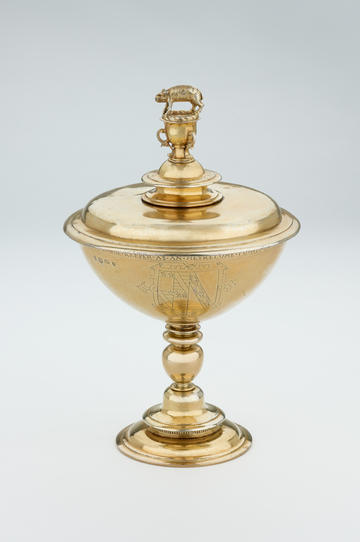 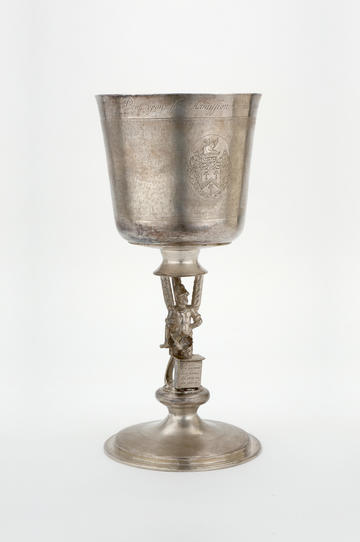 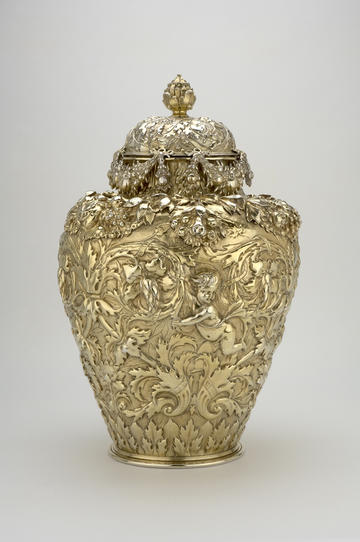 Discover more ways to support the work of the Museum