Marking the foundation of England 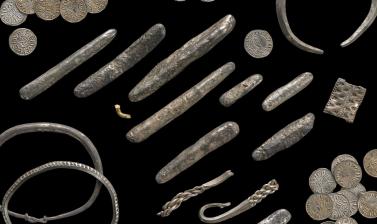 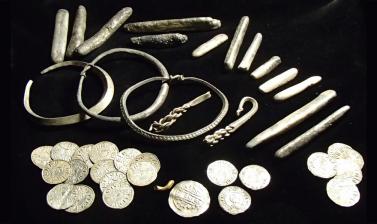 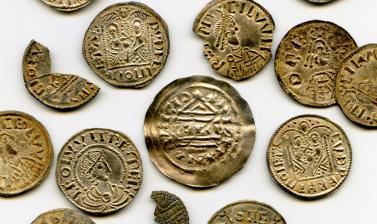 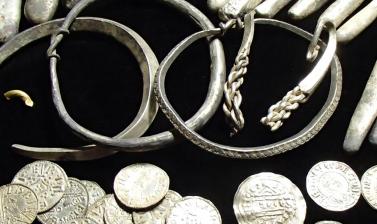 The Watlington hoard was discovered on private land by metal-detectorist James Mather in 2015. Comprising about 200 coins (some of them fragmentary), 7 items of jewellery and 15 ingots (bars of silver), the find is not particularly large, but it is hugely significant because it contains so many coins of Alfred the Great, King of Wessex (r. 871–899) and his less well known contemporary, Ceolwulf II of Mercia (r. 874–c. 879).

The hoard contains 13 examples of the rare ‘Two Emperors’ penny that shows Alfred and Ceolwulf seated side by side below a winged figure of Victory or an angel. The image on the coins suggests an alliance between the kingdoms of Wessex and Mercia. This challenges the accounts found in written sources which dismiss Ceolwulf as a puppet of the Vikings. Ceolwulf II, the last king of Mercia, quietly disappeared from the historical record in uncertain circumstances and Alfred and his successors then forged a new kingdom of England by taking control of Mercia, before conquering the regions controlled by the Vikings.

The hoard can be dated by the presence of a single ‘Two-Line’ type penny which was not produced until the late 870s, after the Battle of Edington (May 878) between Alfred’s forces and a Viking army. Viking forces moved both by water and land, and they likely used the ancient trackway known as Icknield Street which passes through Watlington, close to where the hoard was found. It is possible that the hoard was buried in the wake of this violence or during the ensuing movement of peoples.

Thanks to pivotal grants from the Heritage Lottery Fund, The Art Fund (with a contribution from the Wolfson Foundation), the Ashmolean Friends and Patrons, and several individuals the Ashmolean was able to save the hoard for the nation in 2016.

Thanks to pivotal grants from the Heritage Lottery Fund, The Art Fund (with a contribution from the Wolfson Foundation), the Ashmolean Friends and Patrons, and several individuals the Ashmolean was able to save the hoard for the nation in 2016.

About the Heritage Lottery Fund

Thanks to National Lottery players, we invest money to help people across the UK explore, enjoy and protect the heritage they care about - from the archaeology under our feet to the historic parks and buildings we love, from precious memories and collections to rare wildlife. Find out more here.

Art Fund is the national fundraising charity for art. In the past five years alone Art Fund has given £34 million to help museums and galleries acquire works of art for their collections. Find out more about Art Fund and the National Art Pass here.