This newly redesigned gallery brings the Ancient Middle East to life. From Iran to the Eastern Mediterranean, across some 10,000 years, artefacts in this gallery reveal the lives – and deaths – of their owners. Find out how the objects came to the museum, and try out new interactives that let you have a go at rolling a cylinder seal and writing in cuneiform.

The Ancient Middle East gallery explores some of the most important developments in human history. By 9000 BC village communities at places like Jericho were constructing their homes from some of the first mud bricks.

Here you can come face to face with what may be the oldest portrait (around 7000 BC), a human skull from Jericho with plastered features and eyes inlaid with shells. Remembering a person in this way may have helped bind the community together.

Over 5000 years ago some towns in Mesopotamia (modern Iraq and eastern Syria) began to grow into the world’s first cities. Writing on clay tablets was developed for bookkeeping but was later adapted to record history, myth and science. The famous Sumerian King List (about 1800 BC) names the cities of Mesopotamia and their rulers as if in an unbroken sequence from before ‘the Flood’ to the time it was made.

Some kingdoms became powerful through trade and conquest. According to myth, kingship itself was lowered by the gods from heaven to the Mesopotamian city of Kish. The site was excavated between 1923-1933 by the University of Oxford and the Field Museum, Chicago, a story linked to colonialism and empire. The gallery contains extraordinary objects removed from Kish, including inlay decoration from Mesopotamia’s earliest royal palace. Rich finds from graves at this site are displayed with examples of jewellery from the Royal Graves of Ur.

While long distance trade between Mesopotamia, Iran and the Indus Valley (modern Pakistan) is revealed by finds from Kish, a truly international age emerged in the period 2000-1000 BC. Elaborate wall paintings from the site of Alalakh in modern Turkey reveal the close connections between the civilizations of the Mediterranean world and those of Syria and Mesopotamia. 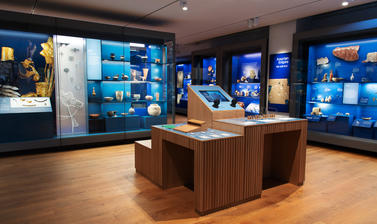 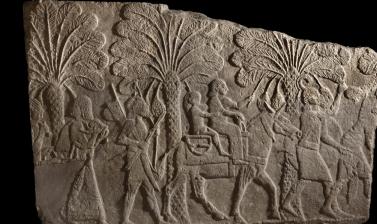 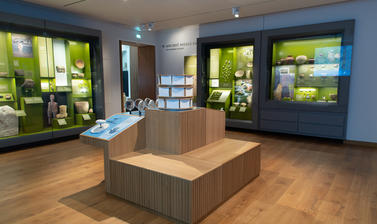 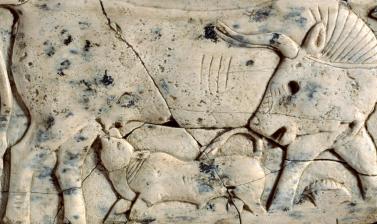 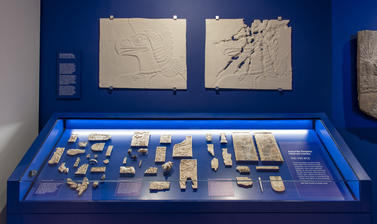 ON DISPAY IN THIS GALLERY