ASHMOLEAN ARTISTS AT HOME – PART ONE

DISCLAIMER: This article contains sensitive images which some people may find disturbing.

By Dr Lena Fritsch
Curator of Modern and Contemporary Art

Never before have I stayed so much at home; never before have I sat so much at my desk; never before have I spent so many hours with myself. For most of us, the last weeks brought big changes to our everyday lives – and our perception of time and space has been transformed. Wondering how others have been dealing with the lockdown, I contacted four artists represented in the Ashmolean’s collection, curious to hear their stories. The artists range from a young talent to well-established voices of the international art world; they work in various artistic media and in different parts of the UK and Europe. My question was simple: Has the Lockdown affected your work in any way and if so how?

Jenny Saville (b.1970), who lives in Oxford, is an internationally celebrated artist, best-known for her large-scale paintings of naked human bodies. Emerging as part of the Young British Artists scene in the early 1990s, Saville quickly rose to critical and public recognition with her contemporary approach to the classic genre of figure painting. Her work is represented in collections worldwide. In 2015/16, the Ashmolean dedicated an exhibition to her works on paper inspired by historic Venetian drawings, and acquired one of Saville’s works. Since the lockdown, she has been working between a home studio and the back of a truck that is parked outside her house. She has been thinking of artists in exile:

Like the poet Ovid sent to the edge of the Roman Empire, and Michelangelo in hiding in 1530 under the Medici Chapel in Florence, where he made drawings on the wall, while hiding from soldiers in Florence. I’ve thought about The Black Death and what I learnt about that from the time I worked in Sicily. It arrived in Europe by boats from Asia docked in Messina, Sicily. And I’ve thought about Egon Schiele and Gustav Klimt, who both died from the Spanish flu. I’ve watched artists’ documentaries on Matisse, Picasso and Cy Twombly and have been sent an incredible set of pastels from the pastel shop ‘Maison du Pastel’ in Paris. The set is based on the colours of Monet’s gardens so I’m working with those. All of history seems to have come into view. 'Work and keep working, don’t put anything off, do it now...', is what I’ve told myself. And make the work good…. 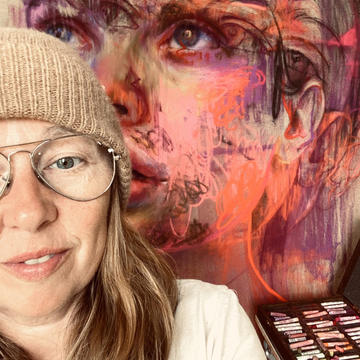 Jenny Saville in her studio 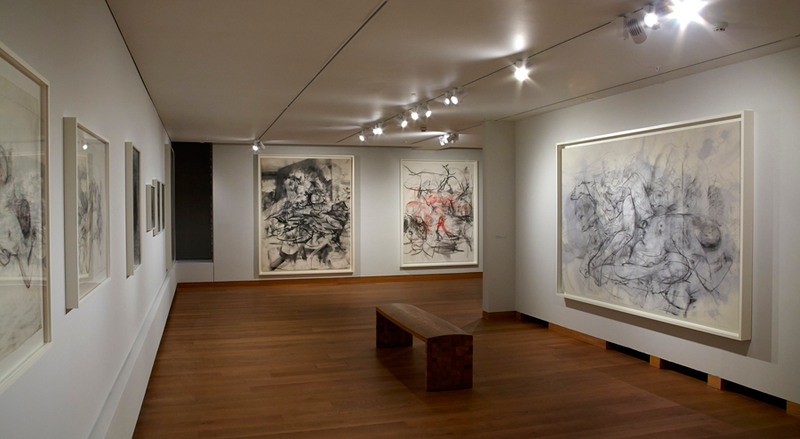 Jenny Saville's work at the Ashmolean

Just before the Ashmolean temporarily closed, we acquired three works on paper by Berlin-based artist Salomé (b.1954). Salomé mainly works in painting, drawing, performance, and sculpture. He first became known as one of the members of the Junge Wilde (‘Young Wild’) art movement that rocked the 1980s art world with their impulsive and expressive painting style. Today, Salomé’s works can be found in public collections worldwide, ranging from Kupferstichkabinett, Berlin to MOMA, New York. Dusche III, 1987 in the Ashmolean’s collection is representative of his dynamic language, often focussing on the human body and using his personal life as inspiration. The lockdown has not influenced his art, he told me:

I have been working on my complete archive for over two years now, going through and adding works, and photographically documenting them. The archive covers over 45 years, after all. I have been making good progress, and hard disks are filling up. This takes a lot of time and things that I had forgotten about tend to appear. As an artist you are used to a ‘lockdown’ in your studio as you are mostly alone with yourself and your art. But of course my social contacts to the outside are now very limited and I miss to be vis-à-vis with my friends. At least we have substitutes today through technical media. Life goes on… 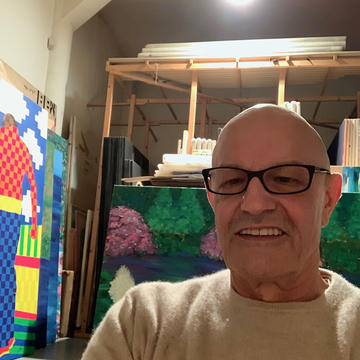 Salomé in his studio 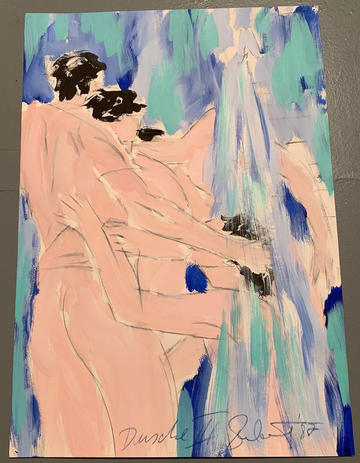 Dutch artist Marcelle Hanselaar (b.1945) lives in London and works in painting and etching. The Ashmolean represents her unique, expressive practise with a portfolio of thirty skilful etchings, The Crying Game, 2015-17, confronting the viewer with human violence in various shapes and forms. Asked about her recent experience, the artist wrote:

The restrictions have created a quiet city full of birdsong and all the studio time that I have always wanted. But I have also begun to feel its limitations tightening around my outlook. I have been going on long solitary walks, early in the morning before many people are out and physically I am healthier than ever.  The constrains of a lockdown aren't just about physical, social space but very much affect our sense of time. With our plans in suspended animation and with the unknown outcome of the present situation it feels as though the future us receding into the mist like a distant past. I am working intensively on what seems to become a series of paintings. … Painting is the only way to keep me grounded in these uncanny times. 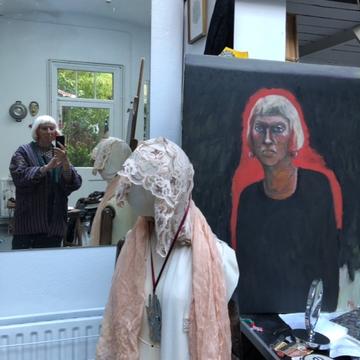 Marcelle Hanselaar in her studio 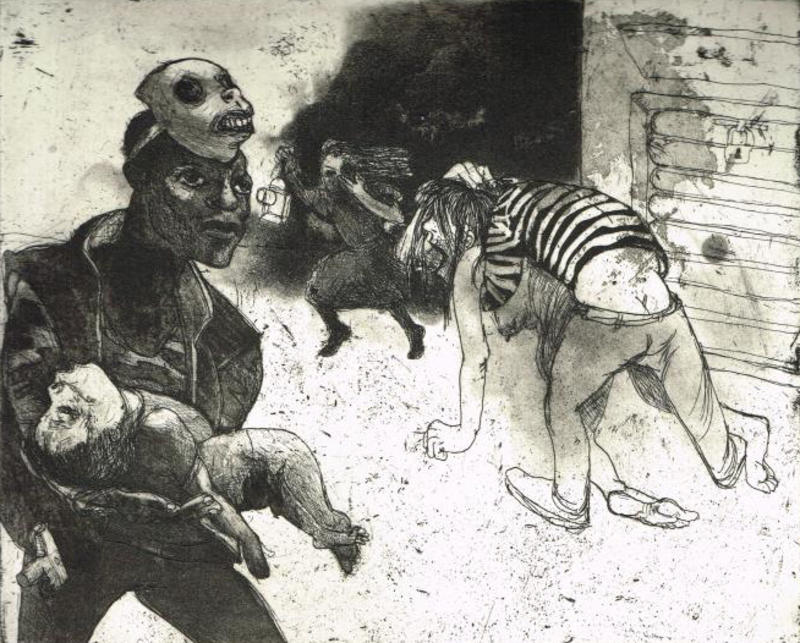 Graduating from the Ruskin School of Art in Oxford two years ago, Jessica Heywood (b.1994) mostly works with textiles, embroidery, and drawing. I first met her when she was awarded the Ashmolean’s 2018 Vivien Leigh Prize. Heywood is represented in the Ashmolean’s collection with an abstract drawing, If Only Mummy wasn’t Insane #1, 2018. She lives in Sheffield and usually works at The Hepworth Wakefield museum but has been furloughed. This has given her more time to create art:

My studio is currently closed so I’m working from my parents’ kitchen table. I’ve been doing a fair few commissions and I’m currently enjoying one of a ’sea food platter’ of dead fish for a kitchen. My work has become more commercial, both because I need to sell a little bit to help with the bills, but also because I’m trying to offer people something that they want, and perhaps feel they have a bit of control over in lockdown. So lots of pet portraits! It’s important for me to keep a balance, so I’m still doing my own projects and working on some collaborative embroidery pieces with Edinburgh University’s neuroscience department. We’ve also just adopted a greyhound, so settling her in is a lovely distraction! 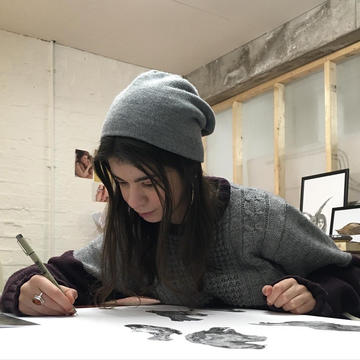 Jessica Heywood in her studio 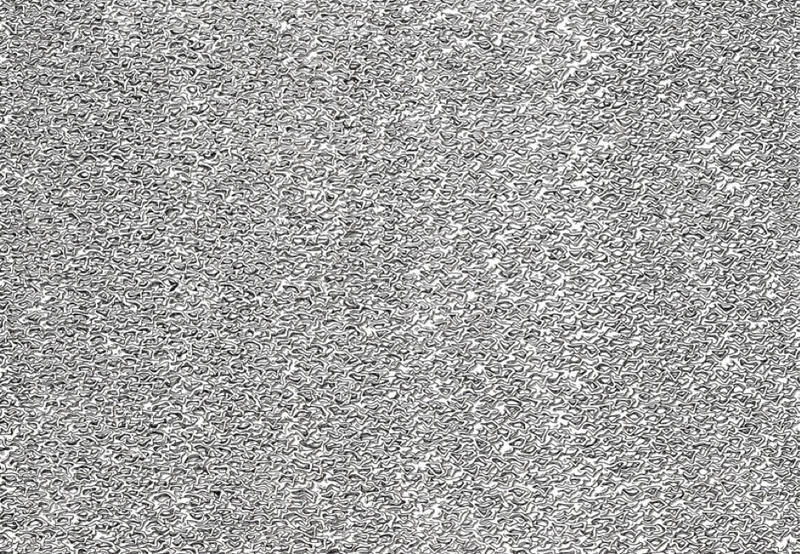