As I walk through the Ashmolean, I often stop to look at this painting, not only because the bright colours and the glinting gold make it eye-catching. I am drawn to the essential human story captured here – that of joy at the birth of a baby – and to the tenderness and dignity in the telling. 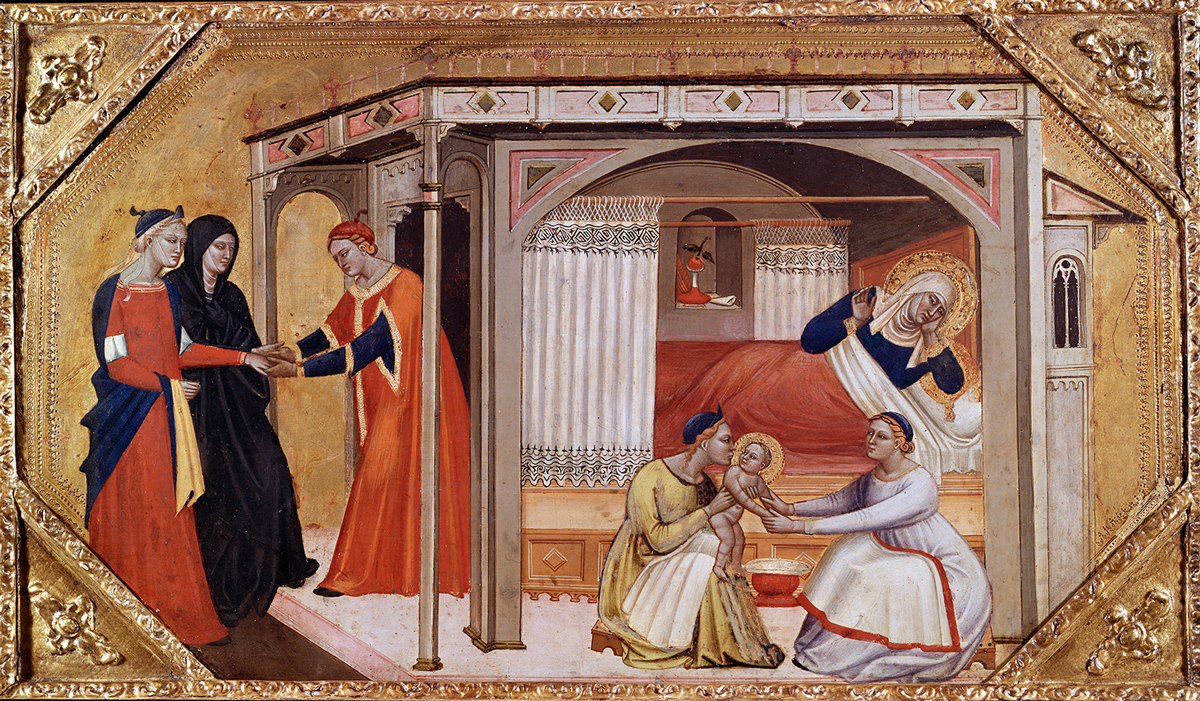 The Birth of the Virgin Mary, about 1365–70, by the artist known as the 'Master of the Ashmolean Predella', tempera and gilding on panel, 37x65 cm

It’s one of the earliest paintings in the collection, made over 600 years ago in Florence using a particular artistic language, yet I feel it speaks directly to us across the centuries. 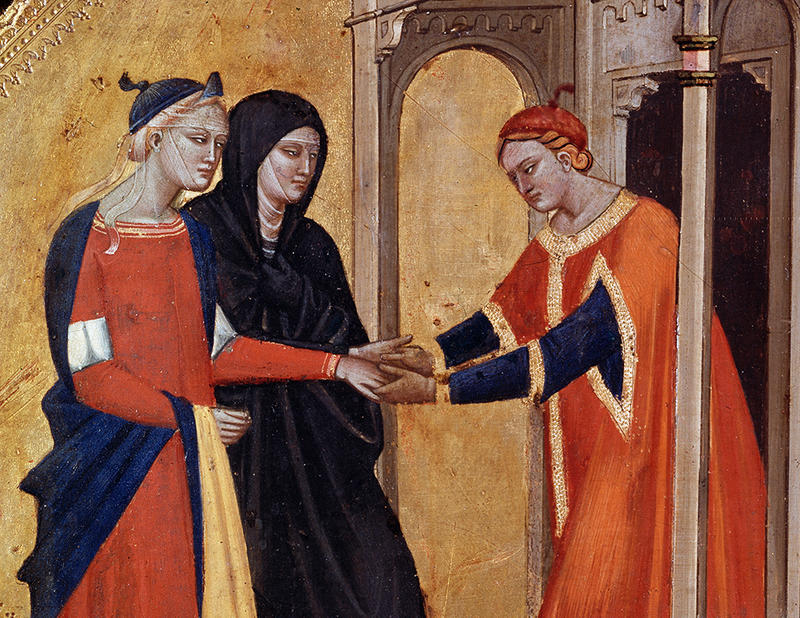 Women are the protagonists here. The artist opens up the side of an elegant house so that we can see visitors arriving from the street, and the interior of a room dominated by a large bed with its hanging curtains. Outside, a well-dressed young woman and an older veiled woman are being welcomed as they step towards the front door – another woman warmly clasps their hands, encouraging them in. Why are they visiting? 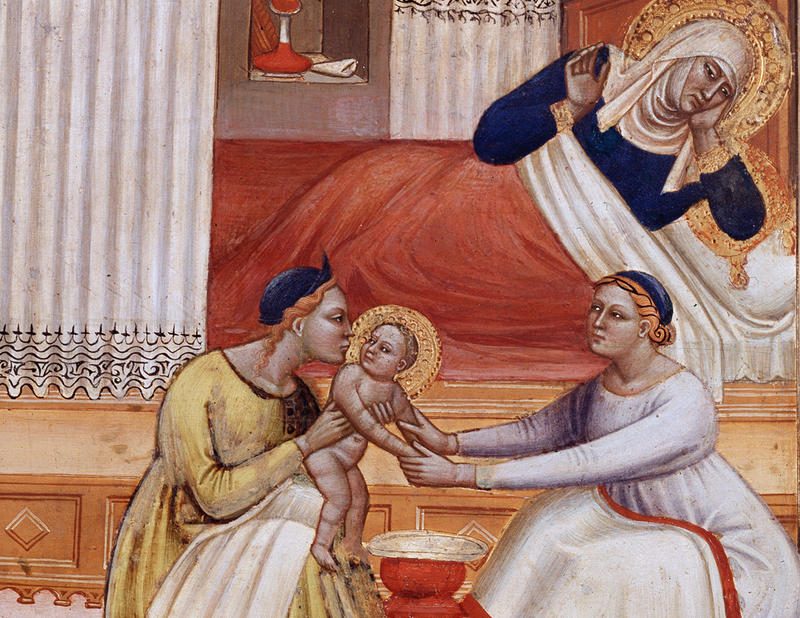 Inside, the veiled woman in bed, propped up on her elbow, looks rather worn-out, although she is in command of the situation – she seems to give approval with her raised hand. Look at the handy storage space by her bed, where we can see refreshments, especially a carafe of red wine with an apple perched on top. She looks down at the lively baby girl, who I think is about to be kissed as she is passed from one young woman to the other. The newborn baby has to be washed – notice the basin of water behind – then dried with the red-bordered towel spread over one woman's lap, before being tightly wrapped up in the linen cloths, ready on the other woman’s lap, to keep her warm and safe.

‘No Ordinary Scene of Childbirth’ 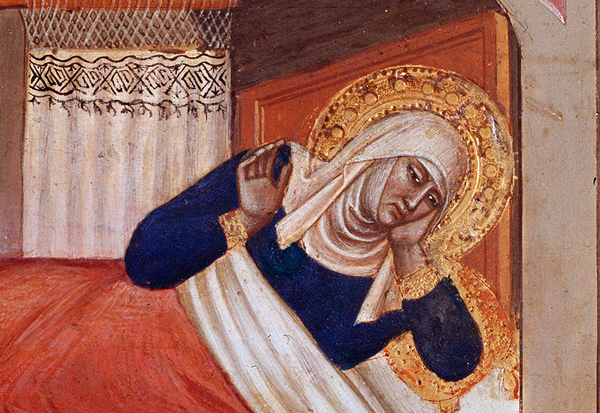 The room is very comfortable and the women are probably part of the extended family, themselves mothers, who have helped with the birth. The bed curtains allow for privacy and keep out draughts, as well as being attractively embroidered, perhaps by one of the women. Carved wooden chests run beside the bed, acting as seats while holding bed linen and clothing. The younger women sit on low wooden stools, easily portable. In Florence at this time, women – friends and family - came together to celebrate a birth, bringing refreshments and gifts, often involving specially-made trays and ceramics.

The gold haloes around the mother and the baby remind us that this is no ordinary scene of childbirth: the baby is Mary, who will in turn become the mother of Jesus Christ. The veiled woman is St Anne, who does not appear in the New Testament but whose story, told in early sources, became very popular in the 1200s and 1300s. Anne (Anna or Hannah) and her husband Joachim had not been able to have children, but through prayers and a miracle the elderly Anne conceived and safely gave birth.

Women distressed by infertility prayed to St Anne and they also prayed to her to help them when in labour. Many women died in childbirth in the 1300s, and infant mortality rates were also high. The celebration of childbirth that we see in this painting is a heartfelt one. I find the tenderness and dignity of this painting especially touching – I think the artist was mindful of the risks and dangers that the women represented in the painting would have experienced. Indeed, these painted figures are acting out real concerns and emotions with which the viewer – then and now – can identify. 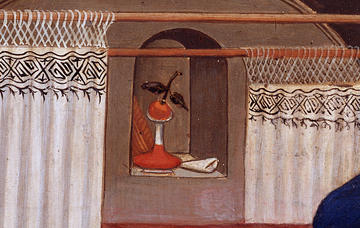 Not only the gold haloes but also the red wine and the apple point to the spiritual aspects of the painting. In Christianity, the sacrifice of Christ on the cross leads to salvation from original sin. The first humans, Adam and Eve, originally sinned by eating the forbidden fruit from the Tree of Life in the garden of Paradise. It was Eve who was first tempted, and Mary is seen as the ‘new Eve’ with a role in salvation as the mother of Christ. The wine refers to the Mass, the sacrament of the Eucharist, where bread and wine are transformed into the body of Christ.

This complex religious content was utterly familiar across all levels of society when this painting was made – and those who could not read had a detailed grasp of the stories involved. 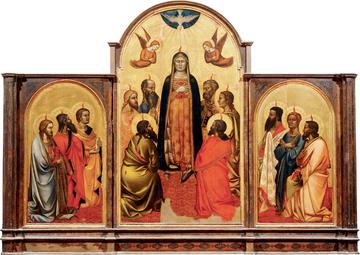 ‘Master of the Ashmolean Predella”

We have to imagine this small painting as part of a series of scenes relating to the life of Mary, set in the lower part (the “predella”) of a large altarpiece standing on an altar in a church, probably in Florence in the 1360s. For an individual kneeling in prayer, the colourful figures and the animated stories at this lower level would have caught the eye – especially with the glinting of the gold in candlelight.

We don’t know the name of the artist who painted this refined and moving image. The picture has long been studied by art historians, who have established that the painter was a member of the leading workshop in Florence in the mid-1300s. This was run by Andrea di Cione, known as Orcagna: his brother Jacopo took over at Andrea’s death in 1368. Other paintings with the same style and approach form a coherent group of works, painted over the years from about 1365 to 1400.

I am very proud that our beautiful painting has given a name to this unknown artist – the “Master of the Ashmolean Predella”.