The Ashmolean has acquired a magnificent full-length portrait of a woman by Sir Anthony van Dyck (1599–1641); and one of the finest groups of early English silver that remained in private ownership.  The acquisition has been made possible by the Acceptance-in-Lieu scheme, administered by the Arts Council, with additional support from the Art Fund and the generosity of trusts, foundations and individual benefactors. 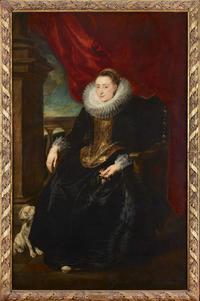 Portrait of a Woman is a rare example of van Dyck’s early work, made when he was just 20 years old.  Only one other full-length portrait from this period is known.  The picture is enormously ambitious for such a young artist.  It shows the influence of van Dyck’s master, Peter Paul Rubens and is clearly the work of Rubens’s most gifted pupil. Van Dyck went on to become one of the most celebrated artists in Europe and the leading portraitist at the Royal court in London.

The painting portrays a young woman adorned with fine jewellery including a gold headdress, pearl earrings and bracelets, diamond rings and an ornate gold chain.  She is sumptuously dressed in a large ruff made of delicate lace, a black “vlieger” over-gown trimmed with lace cuffs, and an embroidered bodice over a black silk skirt. She is confidently smiling at the viewer while seated in an opulent armchair on a balcony with a column and a billowing red curtain behind her. At her feet sits a small pet dog with its white coat rapidly rendered in fluent brushstrokes. The dog is not only painted in the most spirited way but also acts as a symbol of fidelity. Taken together with the roses the woman holds, the portrait was likely made on the occasion of her marriage.  The companion picture of her husband is now at the Royal Museum of Fine Arts in Antwerp.  The latter has been tentatively identified as Alexander Vinck (or Vincque), a member of a family of prosperous Antwerp merchants who traded in luxury goods.  The woman is likely to be Alexander’s wife, Gertrudis Wiegers. 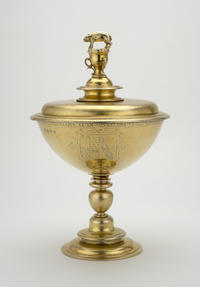 Both the painting and an exceptional group of early English silver come, through descent, from the collection of Sir Ernest Cassel (1852–1921).   Cassel was an extraordinary man.  Born in Cologne, Germany to an Ashkenazi family, he immigrated to England in 1869 amidst widespread persecution of Jews in Europe.  Arriving penniless in Liverpool aged just sixteen, he made his own fortune as a merchant banker and financier, and went on to be a trusted advisor and friend to King Edward VII.  He was knighted in 1899 and made a Knight Grand Cross of the Order of the Bath in 1909.  Cassel was a pioneering collector of historic English silver and fine art.  Although his exceptional collection was comparatively little known in his lifetime, it was later recognised for its rarity, splendour and importance.

The finest piece that comes to the Ashmolean in this group is the ‘Bacon Cup’ of 1574.  This silver gilt cup and cover is one of three made for English politician Sir Nicholas Bacon (1510–79) from the Great Seal of Queen Mary I (reigned 1553–1558). The cup is attributed to Affabel Partridge (fl. 1554–79), goldsmith to Queen Elizabeth I and one of the foremost London goldsmiths of Elizabethan England.  When Elizabeth ascended the throne in 1558 Mary’s seal was rendered unusable and given to Sir Nicholas Bacon as the new Lord Keeper of the Great Seal. Sir Nicholas had the seal made into three cups in the 1570s, as heirlooms for his country houses.

The bowl of the cup is engraved with the arms and motto of Sir Nicholas; the family crest, and a boar – a pun on the name Bacon – forms the finial, hence the ‘Bacon Cup’. The cup is amongst the few surviving examples of 16th-century London hallmarked silver and, with its connection to the courts of Queens Elizabeth I and Mary I, it is a historically important work which perfectly demonstrates the goldsmiths’ art of the Tudor period.

The ‘Bacon Cup; has been acquired with a further seven pieces of English silver from the 16th-18th centuries, meaning that all the most important pieces from the Cassel collection are now in British public collections.  They join the Ashmolean’s British silver collection which is one of the finest of its kind anywhere in the world. They will be displayed in the Museum’s England 400 AD-1600 AD Gallery which tells the story of how England came to be a unified nation and a cultural, political and military power under the Tudors.

Matthew Winterbottom, Curator of Sculpture and Decorative Arts, says: ‘The Ashmolean is immensely grateful to the Arts Council and the Art Fund for the allocation and support for this outstanding acquisition.  As a particularly fine example of Van Dyck’s early work, Portrait of a Woman is now a highlight of the Museum’s European Art Gallery and one of the finest paintings in our entire collection.

‘The ‘Bacon Cup’ and group of English silver add to our rich holdings of early modern decorative arts; and now all the most important pieces from Sir Ernest Cassel’s unique collection are in public museums.  They are not only fascinating and beautiful objects which illuminate British history; but also a tribute to Sir Ernest’s extraordinary personal story and achievements.’

Edward Harley, OBE, Chairman, Acceptance in Lieu Panel, says: ‘I am delighted that the Cassel collection of silver and a full-length portrait by Sir Anthony van Dyck (which has been on loan to the Ashmolean for some time) have been acquired through the Acceptance in Lieu Scheme by the Ashmolean Museum. The quality to be seen in the portrait and in the selection of the silversmiths’ craft is a testament to the collecting skill of Sir Ernest Cassel. Many of the magnificent items from this silver collection have been exhibited or loaned over the last century, and I am pleased that they will now find a permanent home at the Ashmolean. I hope that this example will encourage others to use the scheme to find a place for great art in our national collections.’

Culture Minister Caroline Dinenage says: ‘It is wonderful that the Ashmolean Museum has acquired these works thanks to the Acceptance-in-Lieu scheme. The reason this scheme exists is to save important works for the nation and I know they will be great additions to the Ashmolean's collection.’

Images for editorial use are available to download at: http://bit.ly/ashmoleanacquisitions

This acquisition has been accepted in lieu of Inheritance Tax by HM Government under a hybrid arrangement and allocated to the Ashmolean Museum.  The amount of tax that could have been settled by the acceptance of the painting and silver exceeded the actual liability payable by the offerors. The items settled a total of £6,112,400 in tax and the Ashmolean to whom the items have been permanently allocated in accordance with the condition of the offering estate has made good the difference of £379,525.79 with the assistance of a grant from the Art Fund and from its own acquisition funds.

The Acceptance in Lieu scheme is administered by the Arts Council. The Acceptance in Lieu Panel, chaired by Edward Harley OBE, advises on whether property offered in lieu is of suitable importance and offered at a value which is fair to both nation and taxpayer. AIL allows those who have a bill to Inheritance Tax to pay the tax by transferring important cultural, scientific or historic objects to the nation.  Material accepted under the scheme is allocated to public collections and is available for all. In the last decade this important government initiative has brought £423m worth of treasures into public ownership for the enjoyment of all.

Arts Council is the national development agency for creativity and culture. We have set out our strategic vision in Let’s Create that by 2030 we want England to be a country in which the creativity of each of us is valued and given the chance to flourish and where everyone of us has access to a remarkable range of high quality cultural experiences. We invest public money from Government and The National Lottery to help support the sector and to deliver this vision.

Following the Covid-19 crisis, the Arts Council has developed a £160 million emergency response package, with nearly 90% coming from the National Lottery, for organisations and individuals needing support.  Find out more at www.artscouncil.org.uk/covid19