Reflections on the Painter of Light

Imagine we’re in Covent Garden in the late 18th century. What was once a patch of agricultural land has been turned into one of the first public squares in the country - it’s now a vibrant centre for entertainment, bustling with market stalls, coffee houses, flower shops and even the occasional street performer. 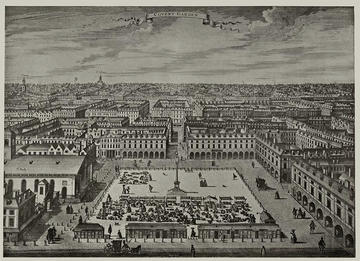 Tucked away in a corner of the square is a barber shop, where local patrons drop in for a wash and a shave. As you walk through the doors, you might be greeted by the strong scent of wash balls - a warming medley of clove, cinnamon and nutmeg.

Pinned up on the walls, alongside the periwigs, are a number of landscape paintings. The owner of this shop, brimming with parental pride, has displayed his young son’s artworks for all his clients to see as they come and go.

It’s a simple act, but one that calls to mind a feeling that is familiar to many - the pride of a parent over their child’s achievements.

What is perhaps slightly less familiar, however, is that same child going on to become one of the greatest artists in British history.

The barber in question is William Gay Turner. His son, the child behind the artworks, is Joseph Mallord William Turner, born in Maiden Lane, London in 1775. 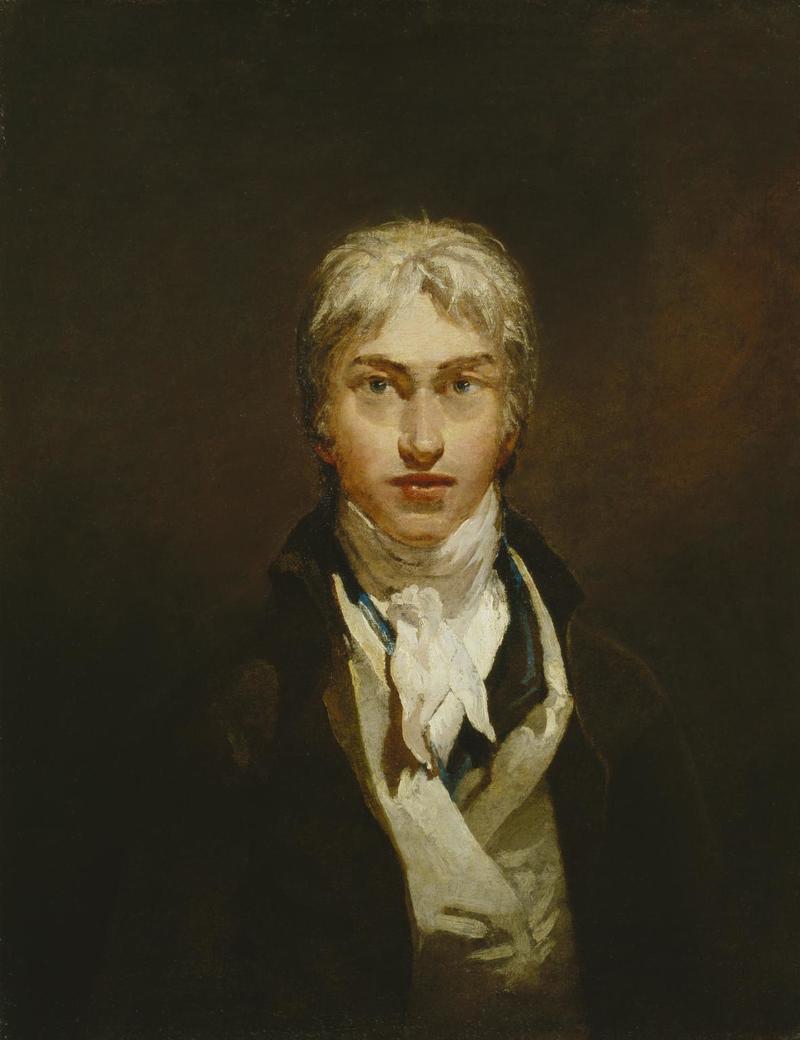 Today, the name Turner is almost synonymous with dramatic, atmospheric landscape paintings. Described by supporter and art critic John Ruskin as ‘the father of modern art’, Turner changed the game when he emerged on the 18th-century art scene.

Turner started to show promise as an artist from a young age, and it wasn’t long before his works we’re not only on display in his father’s barber shop, but on the walls of the prestigious Royal Academy, too. He began his studies at the RA at only fourteen years old, and exhibited his first watercolour works there after just one year of lessons.

In 1796, when he was twenty-one years old, he exhibited his first oil work at the RA. The painting, ‘Fisherman at Sea’, caught the eye of many contemporary critics and set the foundation for Turner’s reputation as one of Britain’s most important artists.

The success of this painting put Turner on the radar of a number of wealthy patrons who supported his work, but also funded his travels and studies abroad. From 1802, he travelled widely throughout the UK and Europe during the summer periods, developing a particular affinity for mountain- and sea-scapes. He took most of his inspiration from what he saw in his travels, earning himself the nickname of ‘Prince of the Rocks’, as he was often found sketching outside, directly from nature. 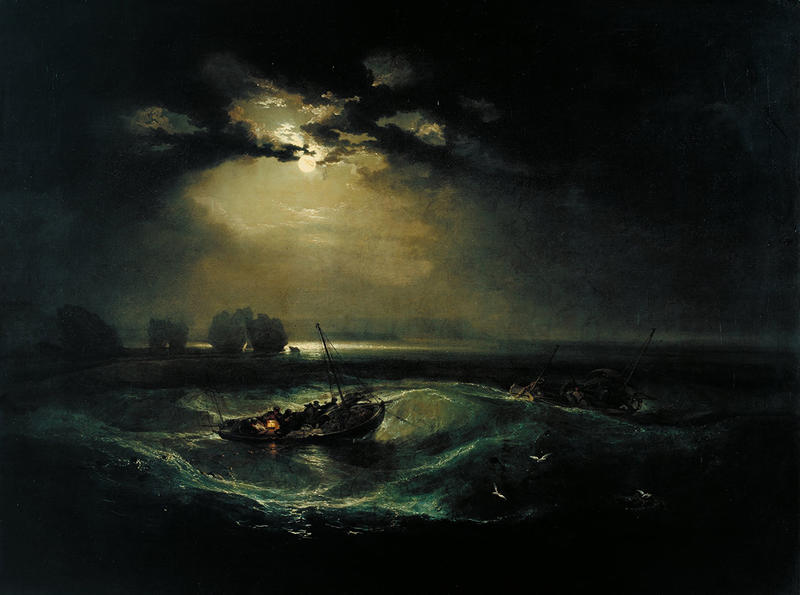 As a young artist, Turner had quickly mastered the art of observing and recording the world around him. Over time, however, he began to pay less attention to minute detail and more to the dramatic, emotive effects of light and colour. Many of his works dealt with natural phenomena, from sunlight and moonlight, to snow, rain and even fog.

As he grappled with these ever-changing and often elusive subjects, the boundaries of traditional painting proved too limiting. His works became more and more expressive, with some bordering on abstract as form and detail became secondary to the mood of the scene. The unconventional methods he used to achieve his results ranged from scraping, blotting and scratching the surfaces of his watercolours, to using his fingers and even palette knives to create lively marks in his oil paintings.

His evolving style perplexed many of his critics and contemporaries. At a time when classical tradition was very much in vogue, his style was anything but. He was accused of ‘debasing’ the Old Master tradition, which embodied balance, detail and precision. In the 1840s, one of his more famous works was described as ‘soap suds and whitewash’.

But for every critic, there seemed to be a supporter who believed Turner to be a genius. Ruskin, now an influential art critic of the time, described him as the artist who could ‘most stirringly and truthfully measure the moods of nature.’ 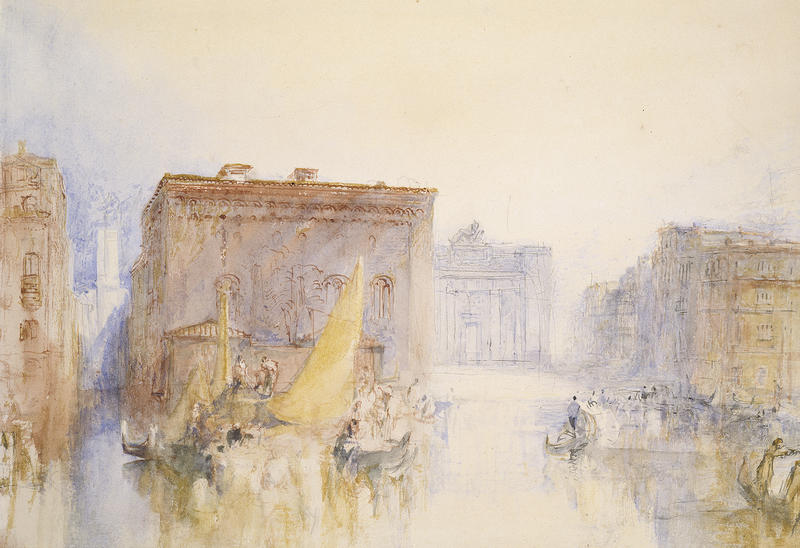 As his work continued to rise in popularity throughout the first half of the 19th century, Turner became increasingly private. Thought to be slightly eccentric and withdrawn, he had few close friends aside from his father, who helped him in his studio. He continued to travel and paint with fervor until he died on 19 December in 1851. At his request, he was buried at St. Paul’s Cathedral, alongside Sir Joshua Reynolds and Sir Thomas Lawrence, who he called his ‘Brothers in Art’.

Whilst Turner was capable of painting scenes in the fine detail that was favoured at the time, he chose to experiment and innovate. We can see now how Turner’s bold artistic choices inspired artists for years to come; his emphasis on light and colour paved the way for the Impressionists, while his departure from form and detail opened minds to the idea of abstract art.

Beyond his stunning landscapes, which continue to stir emotion in the viewer almost 200 years later, it was his willingness to push the boundaries of art that keeps his work relevant and inspiring today. 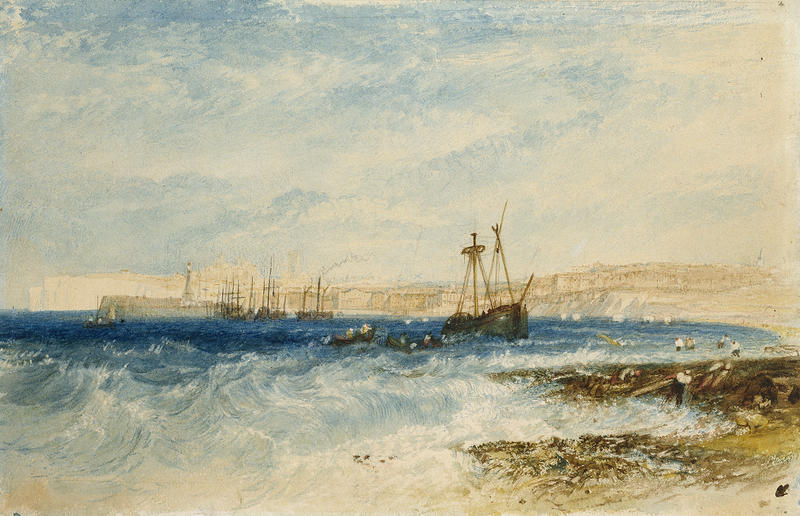 Find a Turner for your wall in our online print shop

Support us in caring for our collections