From Pre-history to Picasso 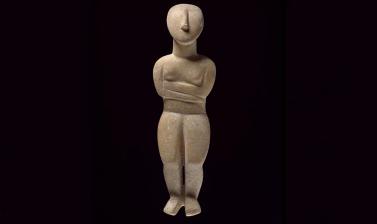 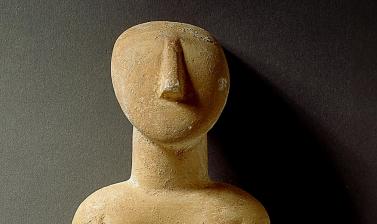 The Cyclades are a group of more than 30 small islands in the Aegean Sea. Many are famous for the quality and range of their stones and it is perhaps not surprising that some of the ancient inhabitants were accomplished sculptors. In the period around 3200–2300 BC a distinctive civilisation, commonly called the Early Cycladic culture, emerged. It is best known from the marble vessels and figurines that the islanders buried with their dead.

The majority of Early Cycladic sculptures are representations of women, some of which are carved with natural proportions while others are more idealised. This figurine is an example of the so-called Spedos type. The body’s shape has been reduced to broad flat planes, the proportions of which might suggest that they were planned using a compass. Although her arms and legs are clearly defined there was apparently no interest in carving details such as toes, hands and facial details other than a prominent nose. Close examination, however, reveals faint remains of painted eyes, eyebrows and hair or some sort of headdress. It is clear that the sculpture was meant to be held or to lay flat as it is unable to stand without support, a feature presumably related to its association with the dead in burials.

The figurine was purchased by Arthur Evans when he was the Keeper of the Ashmolean (1884–1908) and is a good example of the intense fascination with Early Cycladic sculptures among connoisseurs and artists at this time. They served as inspiration for Brancusi, Modigliani, Giacometti and Hepworth and were collected by Moore and Picasso.