DETERMINING THE FLOW OF GOLD ACROSS ANCIENT ASIA, AFRICA AND EUROPE, FROM AD 200 TO AD 700

DETERMINING THE FLOW OF GOLD ACROSS ANCIENT ASIA, AFRICA AND EUROPE, FROM AD 200 TO AD 700

Banner image: Gold coins in the ablation chamber about to be sampled by the laser

This research project seeks to build a network of the flow of gold across ancient Asia, Africa and Europe, from AD 200 to AD 700, largely through the chemical analysis of gold coins held by the Ashmolean Museum. The analytical techniques will include X-Ray Fluorescence, LA-ICP-MS and Negative Muon analysis. 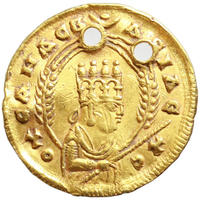 Chemical analyses can allow us to develop a trace element ‘fingerprint’ for the gold of particular geological regions, which can show where the gold a mint uses was originally mined. The analysis of each gold coin, then, reveals a story of mine to mint; by putting these stories together this project can develop a narrative of how gold flowed between the Roman Empire and its African and Asian neighbours.

To build a chemical database of the major and trace element components of the gold coinages held by the Ashmolean museum of the Roman Empire, the Byzantines, the Aksumites, the Kushans, the Sassanians, and the Gupta Indians.

To use this chemical database to identify the various geological regions that these peoples are exploiting for gold over time, and how this changes with historical, climate and environmental events.

To identify periods of recycling or debasement where they exist, and show how they change over time with the various factors listed above.

To transcend traditional subject boundaries to show how this region of the ancient world was interconnected and build a picture of the economic networks that connected these various peoples over time.

To continue building the digital catalogue of the gold coins held by the Ashmolean Museum of the various peoples studied in this project.