One of the ‘Five Great Wares’ 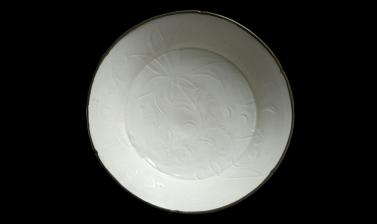 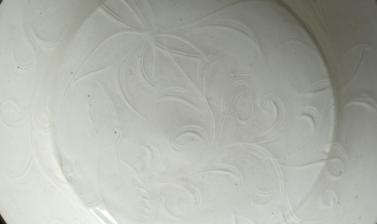 The Song dynasty (960–1279 AD) was one of the most creative and innovative periods in Chinese history and is regarded as the era in which the foundations of modern China were established. In terms of ceramic production the industry reached a high point, with kilns all across the country producing large quantities of wares for markets within China and for export to east and southeast Asia, the Middle East and even as far as Africa.

This dish was made at the Ding kilns in Hebei province in the north of China near modern Beijing. The kilns were fuelled with coal, which gives an oxygen-rich firing atmosphere resulting in warm tones in the glaze colours. Coal has a short flame life, dictating a narrow, high kiln design in which wares were stacked for maximum efficiency. At the Ding kilns the wares were stacked inside earthenware saggars, or firing boxes, which could contain more pieces if they were fired upside down, resting on the rim. This accounts for the unglazed rim of this dish, which has subsequently been bound in copper for smoothness and protection. The lotus decoration is incised by hand, probably with a sharp-tipped bamboo implement. Later in the 12th century, decoration was applied by moulding when the clay was pressed over a dish- or bowl-shaped mould already carved with the ornament.

Ding wares were presented as tribute at the Song imperial court. They are among the ‘Five Great Wares’ (the others being Ru, Jun, Guan and Ge) identified by a 14th-century writer, and were subsequently sought-after by connoisseurs and collectors.