This gallery shows some of the Ashmolean’s impressive collection of early Italian Art. The use of real gold in these paintings is striking and was used up until around 1500 to evoke heavenly glory in religious art while adding eye-catching highlights to narrative scenes. The use of ultramarine, a blue pigment made from the expensive mineral lapis lazuli, is also present in several of the works here.

In well-to-do homes, devotional paintings of the Madonna and Child were common and were sometimes hinged with other images into small portable works. Large storage chests with painted or carved decoration were commissioned on the occasion of a marriage; a couple of these cassone are on display in the gallery. The stories depicted, from history or literature, played an important part in children’s education. Many of the paintings here, such as St Nicholas of Bari Rebuking the Storm, are fragments from larger works such as altar-pieces, which were broken up for sale from the 1790s as a result of political upheavals in Italy. Narrative scenes from the lower section (predella) of altarpieces were popular with collectors.

The panel painting of The Sack of Rome and the Flight of the Vestal Virgins by Biagio di Antonio Tucci (1446–1516) is one example of a narrative scene compressed into a single panel which may have been set into the walls of a room. The Vestal Virgins were a select group of young priestesses charged with the task of keeping the fire of Vesta burning, as if it were to be extinguished it was thought that the Republic would collapse. Their escape from the marauding Gauls is portrayed a bit like a comic strip and you can follow their escape as they flee the city to the temple at the top right of the composition.

Another charming narrative painting hanging in the gallery is St Nicholas of Bari Rebuking the Storm by Bicci di Lorenzo, where the saint arrives in a shower of golden stars to come to the aid of sailors caught in a storm. This time the story is summed up in a single scene with the blue sky on the left of the painting contrasting with the stormy clouds to the right. Meanwhile the somewhat corpulent figure of a mermaid, a pagan inhabitant of the oceans, flees to the left with the Saint’s arrival. 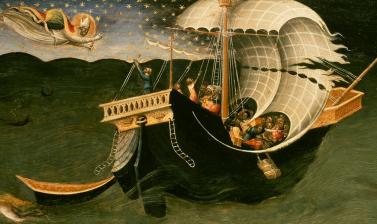 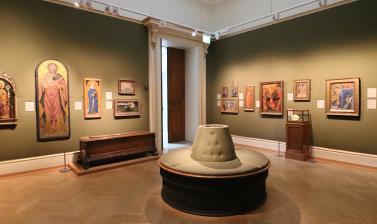 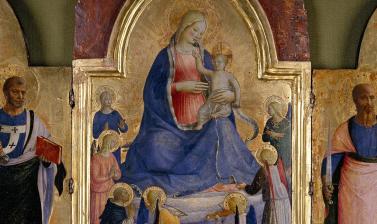 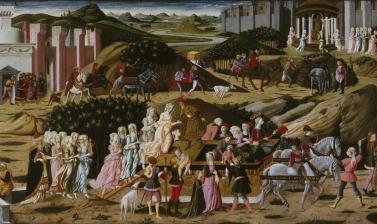