EGYPT AT ITS ORIGINS

THE EGYPT AT ITS ORIGINS GALLERY

The Lisa and Bernard Selz Gallery

Following the galleries in order from 22 to 27 you can trace a fascinating chronological journey illustrated by many of the Ashmolean’s more than 40,000 Egyptian and Sudanese artefacts which comprises one of the finest collections in the world.

The first gallery investigates the origins of ancient Egyptian civilization from the Palaeolithic period (c. 1,000,000–10,000 BC) to the unification of the country under a single king at the start of the Early Dynastic period (c. 3100 BC).

The centre of the gallery is dominated by the striking limestone statues of the fertility god Min (dated c. 3300 BC). These are two of three statues of the Egyptian deity which were excavated at Koptos in 1893–4 by William Matthew Flinders Petrie, the renowned Egyptologist. They are among the oldest preserved stone sculptures in the world. Petrie’s excavations in Egypt presented many other pieces of early Egyptian Art to the Ashmolean, making its collection of early Egyptian material one of the most significant in the world outside Cairo.

Many items on display in the gallery are from Hierakonpolis, the ‘City of the Falcon’, one of the largest Predynastic towns to be excavated in Egypt. One intriguing object is the ceremonial ‘Two Dog’ palette – a double-sided cosmetic palette derived from the type used for grinding eye paint during the Predynastic period. This one does not appear to have been used so was probably a ritual object, and both sides are crammed with lively reliefs of animals and strange creatures.

Across the gallery from the palette is a case containing the Narmer and Scorpion mace-heads which were also found at Hierakonpolis. Maces were used as weapons during the Predynastic period but the intricately carved objects on display here were purely ceremonial. The larger macehead shows the Scorpion King (so-called because of the scorpion you can see carved to the right of his profile) opening an irrigation canal. 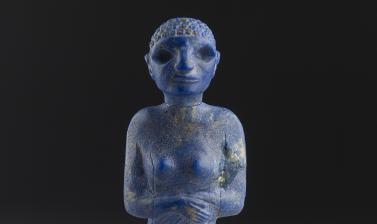 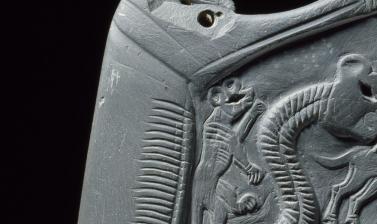 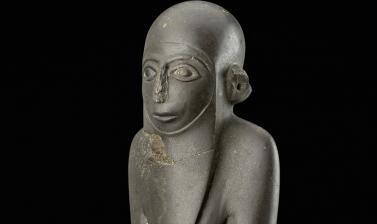 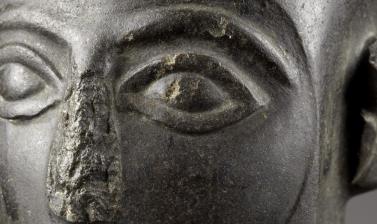 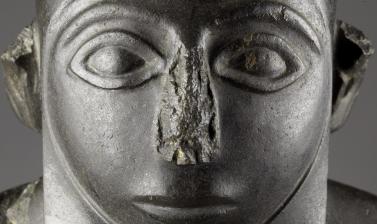