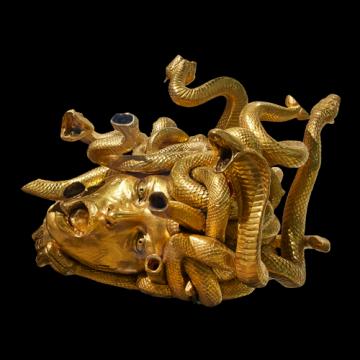 This sculpture was made by the world-renowned British artist Damien Hirst (b.1965), who came to prominence as one of the ‘Young British Artists’ in the late 1980s. It references the beheaded monster Medusa, a well-known motif of Greek mythology.

The mythical Medusa, with her serpent hair, bloodthirsty fangs and wicked smile, was a powerful monster that the Greek hero Perseus was ordered to slay. Just one look at her could turn any man into stone. In life, she represented everything that was non-Greek, but in death her severed head acquired tremendous protective attributes. Medusa's face often adorned warriors' shields and decorative tiles on the rooftops of sacred buildings; it has been a prominent motif throughout art history.

Hirst's sculpture is on display in the Greek World Gallery, on the Ground Floor, and is juxtaposed with a Medusa terracotta tile from c. 540 BC displayed nearby.

The work is part of a large-scale, complex project titled Treasures from the Wreck of the Unbelievable that Hirst worked on for almost ten years and first presented in two simultaneous exhibitions in Venice in 2017. The exhibitions told the story of the ancient wreck of a vast ship named Apistos (Greek for ‘Unbelievable’) and of its treasures discovered in the ocean. It raised questions about art history and fiction, originality and reproduction, and the contemporary art market.