This room showcases the vivid world of the Mughal Emperors who ruled India from 1526 and who were lavish and innovative patrons of art and architecture. Ruling from Agra, Delhi and Lahore the Emperors presided over court arts which achieved a brilliant synthesis of Persian, Indian and European styles.

The finely knotted carpet on display to the right as you enter the gallery from the rear staircase is a superb example of carpet weaving; the craft was introduced to India under the Mughal Emperors who brought weavers from centres such as Herat in modern Afghanistan. The central ‘millefleur’ design incorporates design elements from the Middle East with European influences while the border of lotus buds and flowers is typically Indian.

Highly detailed and colourful Mughal paintings from the Museum’s extensive collection are hung on two walls of the gallery and show scenes from court and daily life at the time.

Objects in the wallcases focus on the expertise of Mughal craftsmen in various materials such as metalwork, ceramics and textiles. A stand-alone case displays a small 17th-century cabinet with finely carved ivory panels depicting the reception of a Dutch trading party at a port in Ceylon, while the back shows an elephant hunt.

By the 1760s the empire was in decline and the British East India Company had begun to control the subcontinent and Western influence began to be seen in Indian art and design. A wall case to the right of the door leading to gallery 34 displays artefacts from this period. The textile case to the left of the door contains the intricately patterned, knitted cashmere gloves belonging to Warren Hastings (1732–1818), the first Governor- General of India. 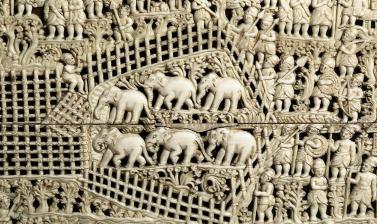 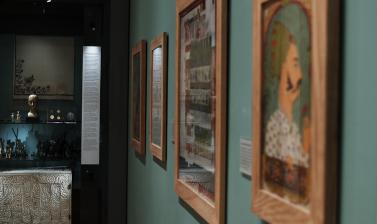 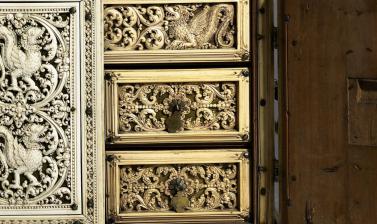