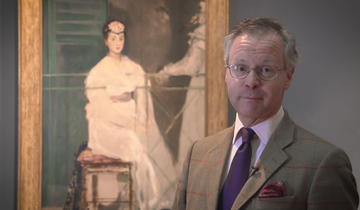 My curatorial responsibilities cover British paintings, drawings and watercolours, and prints before 1945, French art 1800-1945 including John Ruskin's Teaching Collection, the very extensive collections of the Pissarro family, portrait miniatures and musical instruments, and my research interests lie widely within these areas. In particular, I am interested in the education of the artist, in topographical representation, especially of Oxford, and in the reinterpretation of the past as a means of inventing a radical new language for the present. I have been responsible for many exhibitions in the Ashmolean, and have contributed to others in, for example, the Royal Academy, the National Gallery in Washington, the British Museum, the Metropolitan Museum in New York, and the Yale Center for British Art.

Colin Harrison is the Senior Curator of European Art in the Department of Western Art in the Ashmolean Museum. He is also an Associate Fellow of Green Templeton College. He was educated at Oriel College and has spent his entire working life in Oxford, first as the Supervisor of the Western Art Print Room, and later as a curator. Among external appointments, he served as a member of the Executive Board of the International Committee for Museums and Collections of Fine Art for ICOM (2010-2016) and has for many years been an adviser to the Reviewing Committee on the Export of Works of Art and the Acceptance in Lieu Panel, both administered by the Arts Council, England.