A goddess adorned with heavy jewellery 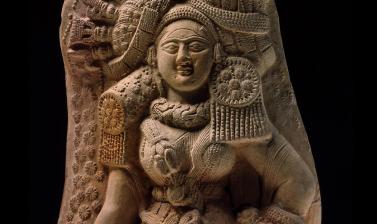 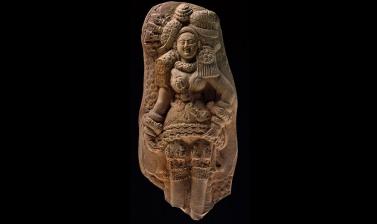 Terracotta has been an important and expressive medium for sculpture in India for millennia, used, for example, to fashion religious icons, votive objects and toys. Many of the earliest examples represent standing females, probably mother-goddesses regarded as fertility figures.

This terracotta goddess was found by chance in 1883, emerging from a river bank at Tamluk (the ancient port of Tamralipti). The first of its type to be discovered, and often described as the ‘Oxford plaque’, it remains the most famous of all early Indian terracottas dating to around 100 BC. Impressed in clay from a very finely detailed terracotta mould, it was given only limited further detailing with the use of tools. The goddess’s smiling face is framed beneath a large headdress with five symbolic weapons worn as hair-pins. Her jewellery includes huge disc earrings, a massive collar, bangles and a heavy girdle worn over a sheer robe.

Many similar female figures, wearing heavy jewellery and with weapons in their headdress, have come to light, especially at sites in Bengal. It has been suggested that she may be an celestial being, a yakshi or female nature spirit, or an ancestor of the later, many-weaponed martial goddess Durga. While the Ashmolean’s goddess has some of the qualities of the yakshi figures often found in early Indian stone sculpture, it is perhaps more likely that she represents, in the guise of a queen or high-born lady, the type of mother-goddess whose widespread admiration would account for the large number of these plaques that survive.