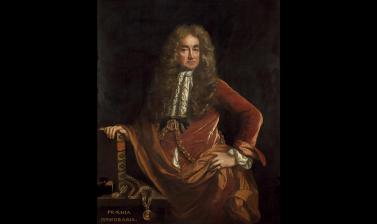 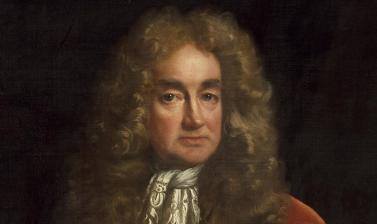 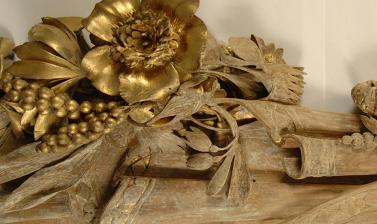 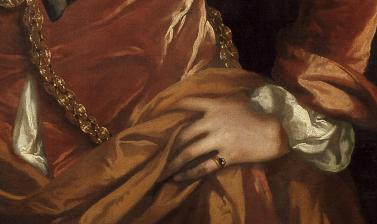 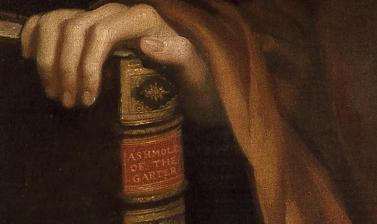 Elias Ashmole was a well-connected antiquary, government official, collector and student of alchemy. His own collection of coins and a magnificent library of books and manuscripts had been dramatically expanded in 1659 with the addition of a collection – both man-made and natural – assembled from around the world by John Tradescant the Elder and his son, John Tradescant the Younger. Ashmole commissioned this portrait to be presented together with his collections to the University of Oxford in 1677. Housed in a purpose-built Ashmolean Museum which was opened in 1683, the collection was installed on the first floor of the building, with other floors devoted to a chemical laboratory and the 'School of Natural History'.

The portrait emphasises Ashmole’s role as Windsor Herald to which he was appointed by King Charles II for the period 1660–75. He stands proudly, his right hand on his most substantial publication, The Institutions, Laws, and Ceremonies of the Most Noble Order of the Garter (1672).

Recent cleaning has confirmed that the magnificent frame round this portrait is the work of Grinling Gibbons (1648–1721), the most celebrated wood carver in England. The elaborate confection of flowers, fruits and vegetables is surmounted by Ashmole’s coat of arms, with the motto 'EX UNO OMNIA' (from one comes all), supported by the legendary twins Castor and Pollux. Although Gibbons is known to have made very few picture frames, the quality and sensitivity of the carving in this example are incomparable.

Shop for framed or unframed prints of the collections