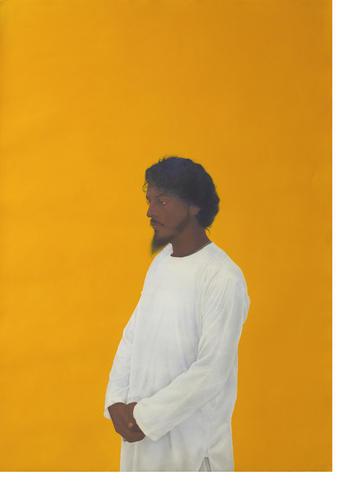 2022 is the 75th anniversary of the creation of Pakistan, and in February the Ashmolean will open a solo exhibition for one of the country’s leading contemporary artists, Ali Kazim (b. 1979). Ali Kazim: Suspended in Time will show 23 works including new pieces made from 2019-21, alongside objects from the Ashmolean’s collections which have inspired Kazim’s work. The exhibition will be the culmination of his time as Oxford University’s first South Asian Artist-in-Residence.

Dr Xa Sturgis, Director of the Ashmolean, says: ‘Ali Kazim is an extraordinary talent. He creates images that are all at once striking, exquisitely detailed and deeply moving. It is an honour for the Ashmolean to bring his work to the UK in this special year.'

Ali Kazim comes from Pattoki in central Punjab. He trained at the National College of Arts, Lahore and at the Slade School, London and returned to Lahore where he is now Assistant Professor. He has exhibited in group and solo exhibitions across the world and his work is held in major collections including the Metropolitan Museum of Art, New York, the British Museum and the V&A.

Kazim’s practice engages with two rich seams of inspiration: the landscapes and ancient civilisations of Pakistan and the subcontinent; and the endless possibilities of the human body. In 2013 he had a formative experience when visiting Harappa, one of the great cities of the 5000-year old Indus Valley Civilisation. He explored sites where pottery fragments scattered a landscape yet to be excavated by archaeologists. He has written: ‘The shards have a physical imprint of the people who made the pots or small statues. Their fingerprints are there. It was unreal when I picked one up and it had some imprint of the potter – I felt it. It was a sort of time travelling key for me.’ Kazim has expressed this thrilling moment in his astonishing Ruins series. In large monochrome watercolours he has painted an imaginary panorama of the Harappa hills, and two magnified sections of the ground. From afar the paintings have a rhythmic beauty, but up-close we find them composed of forensically detailed pieces of broken pottery. Inevitably, the viewer considers the people and fallen civilisations that left them behind; and what might remain of us in the future.

In 2019 Oxford’s Classical Art Research Centre, in collaboration with the Ashmolean, invited Ali Kazim to be Artist-in-Residence on the Gandhara Connections Research Programme. During this period he spent time at the Ashmolean studying and responding to the collections. Gandhara was an area on the northern Pakistan- Afghanistan border where Greek and Roman expansion to the east (from 300 BCE) converged with the spread of Buddhism in South Asia, giving rise to a unique Classical-Buddhist artistic tradition. The Museum’s collections from this area are rich and include schist (soft stone) sculptures of the Buddha and scenes of his life; and devotional objects for the stupa, the reliquary shrine in Buddhist worship. These have inspired Kazim’s three-dimensional works in clay and terracotta. In his piece called Votive Offerings he has transformed ancient reliquary caskets into minimalist, modern forms – forty small sculptures that evoke ancient shapes and the red earth of Gandhara.

The art of the past has also informed Kazim’s virtuosic portrait paintings. At the Ashmolean, he continued his engagement with Mughal and Rajput painting, as well as Company School art – works made by 18th and 19th-century Indian painters who had often trained in late-Mughal techniques. Responding to colonial patrons’ sense of discovery, artists would make large studies of people, native birds and flowers, placed like specimens against plain context-free backgrounds. Kazim uses this simple arrangement – a subject in front of a flat plane of colour – and transforms it into portraits which are a tour-de-force of emotion and hidden narrative. We find this in his Man of Faith series where minutely observed details like a wisp of hair or a peculiar twist of the neck become intensely expressive. Almost floating against unmodulated backgrounds, saturated with thin layers of watercolour wash, the subjects have a monumental dignity, suspended in space and time.

Another highlight of the exhibition, which again reinterprets a historic work of art, is The Conference of Birds. This five-panel monochrome watercolour takes its name from a 12th-century Persian poem by Farid al-Din ‘Attar which tells the story of a group of birds on an epic spiritual journey in search of their king. In Kazim’s reimagining, a flock of different species soar upwards in a graceful composition that sweeps across five metres of paper. Each bird is drawn with exceptionally fine brushwork in subtle greys and blacks that renders the piece fragile and impermanent, despite its size.

Ali Kazim says: ‘During my artistic residency, the ability to see works closely, touch, and hold them, was an exceptional opportunity. To now be part of a show with works I have admired, and observed closely, is a privilege.’

Professor Mallica Kumbera Landrus, exhibition curator and Head of the Department of Eastern Art, Ashmolean Museum, says: ‘It is hugely exciting to bring one of Pakistan’s most talented contemporary artists to the Ashmolean in 2022 - the 75th anniversary of the country’s creation. Ali Kazim has created a beautiful body of work for this exhibition. It offers a profound engagement with the Museum’s collections and the art and history of the subcontinent. Ali has a unique ability to make images that are simultaneously timeless and like nothing you’ve seen before.’

PRESS IMAGES
Images for editorial use are available to download at: https://bit.ly/Ashmolean2022

Jhaveri Contemporary was formed in 2010 by sisters Amrita and Priya with an eye towards representing artists, across generations and nationalities, whose work is informed by South Asian connections and traditions. The gallery’s dedication to original scholarship, engendered through its carefully crafted shows, is one of the many ways it distinguishes itself. Entwined with this philosophy is another guiding principle: showcasing the heterogeneous practices of long-celebrated luminaries as well as emerging talents, often in generously interrogative conversations. With a focus on mining lesser-known art histories, Jhaveri Contemporary facilitates dialogue between artists, curators and historians to add to the wider field of art. https://jhavericontemporary.com