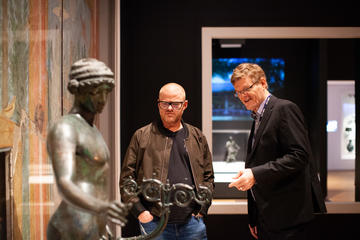 One of the world’s most celebrated chefs, Heston Blumenthal OBE, has created a ‘Last Supper in Pompeii’ for the Ashmolean’s major exhibition. The menu, inspired by the rich food culture of the ancient Roman town, will be served at his Michelin starred Dinner restaurant in London from 7 January–31 March 2020.  Visitors to the Ashmolean and members of the public can enter a competition to win a 'Last Supper in Pompeii’ for four people at Dinner in the London Mandarin Oriental Hotel.

Heston Blumenthal and Executive Chef, Ashley Palmer-Watts, have created a unique interpretation of a Pompeian feast. They have taken inspiration from objects in the exhibition and drawn on the expertise of the Ashmolean’s Dr Paul Roberts, curator of Last Supper in Pompeii. Dishes include carbonised Pompeian bread, made with ancient grain varieties from the Naples region; and a modern take on Libum a desert of baked cheese curds.

To enter the competition visit: www.ashmolean.org/win

Dr Xa Sturgis, Director of the Ashmolean, says: 'It is an extraordinary honour for the museum to have worked with one of the world's most talented and creative chefs.  Heston Blumenthal has turned the subject of our exhibition into an ingenious menu.  I encourage everyone to enter the competition for a chance to taste a Last Supper in Pompeii.'

Heston Blumenthal OBE
Heston Blumenthal is known around the world for his pioneering approaches to cooking and his engagement with the history of food.  With his restless experimentation he has developed innovative dishes that celebrate and reinvent the food of the past.  His menus have delighted diners at his award-winning restaurants in Bray and amazed viewers of his theatrical and ‘fantastical’ TV programmes.  Dinner at the Mandarin Oriental, Hyde Park, was opened in 2011 and within a year had received the first of its two Michelin stars.  Together with head chef, Ashley Palmer-Watts, Blumenthal has created menus that translate his historical research into a modern dining experience. The restaurant serves dishes that draw on everything from 14th-century cookbooks such as those by the royal chefs of King Richard II to Lewis Carroll’s flights of fancy.  Blumenthal’s work has been recognised by the food industry’s highest honours; and in 2006 he was appointed an OBE for services to British Gastronomy.  In the same year he was given an honorary Doctor of Science degree by Reading University’s School of Food Biosciences and he became the first chef to be awarded an Honorary Fellowship of the Royal Society of Chemistry.

Last Supper in Pompeii at the Ashmolean Museum
Until 12 January 2020
When the ash from Mount Vesuvius began raining down on Pompeii in AD 79, people in the resort-town were engaged in typically Italian activities – eating, drinking and producing food.  Located in the sunny paradise of southern Italy, Pompeii was sandwiched between lush vineyards and fertile orchards to one side and the bountiful waters of the Bay of Naples to the other.  The town produced more wine, grain and olive oil than it could consume and exported its gourmet products across Italy. Everything from the exquisite mosaics in the villas of the wealthy to the remains found in kitchen drains reveals what the people of Pompeii loved to eat and drink.  The Ashmolean’s 2019 exhibition, Last Supper in Pompeii, tells the story of this ancient Roman town’s love affair with food. Many of the objects, on loan from Naples and Pompeii, have never before left the country.  They range from the luxury furnishings of the Roman dining room (statues, frescoes and silver dining services), to the carbonised food that was on the table when the volcano erupted.  Read the press release here.