Coming to cinemas worldwide with Exhibition on Screen 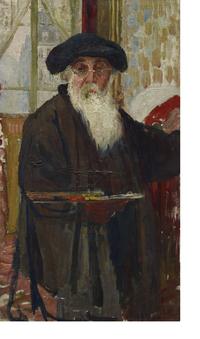 The Ashmolean’s spring exhibition will be the first show in Britain in 20 years devoted to the ‘father of Impressionism’, Camille Pissarro (1830–1903). It will feature 120 works, 80 by Pissarro and 40 by his friends and contemporaries, with eight paintings on display for the first time in this country. The exhibition draws on the Ashmolean’s Pissarro archive, the world’s largest collection devoted to an Impressionist artist, revealing intimate and fascinating details about Pissarro, his artist-friends and relatives. It aims to show him as the galvanising force that propelled modern art forward and without whom there would have been no Impressionism. The show will also be the subject of a new feature-length film by critically-acclaimed production company, Exhibition on Screen, available in cinemas worldwide from 24 May 2022.

Despite being one of the founding members of the most famous artistic movement of all time, Camille Pissarro remains less well-known than his associates, Cézanne, Monet, Degas and Gauguin. He was the oldest of the Impressionists and the only one to exhibit at all eight of their exhibitions which he helped organise from 1874–86. His central role is all the more remarkable considering his outsider-origins. He was born to French-Jewish parents in the Danish West Indies and was 25 before he settled finally in France. He arrived in Paris just in time for the end of the 1855 Exposition Universelle where paintings by Jean-Baptiste-Camille Corot and Gustave Courbet’s one-man show were a revelation to him. The anti-establishment French Realists and their treatment of working people struck a chord with Pissarro who had rejected his own bourgeois background. Unlike his Impressionist contemporaries, he never painted the leisured middle classes or romantic landmarks, preferring simple pastoral scenes, farmers, or just the view from his window. Despite being a committed atheist, he was unable to escape his Jewish roots however. Amidst virulent anti- Semitism in 19th-century France, the notorious Dreyfus affair of 1894 split opinion among artists as it did the whole country. Degas emerged as a rabid anti-Semite who made poisonous comments about his one-time collaborator, refusing to have anything to do with Pissarro after 1894. Writing to his niece in 1889, Camille reflected on his lack of commercial success and acceptance as an artist: ‘…a matter of race, probably’.

Nonetheless, Pissarro made close friends with other painters who respected his individuality and recognised his influence, even if they disagreed with his politics. With Monet and Sisley he defined the early phase of the Impressionist landscape, painting en plein air to capture effects of weather and experimenting with lighter palettes and radical composition. When Pissarro returned to France from London after the Franco-Prussian War (1870–1), he was instrumental in organising the first Impressionist exhibition in 1874. Between 1872 and 1885 his closest relationship was with Cézanne who found the encounter transformational. Cézanne wrote that he learned to work regularly during his first year with Pissarro who was ‘a father to me. A man to consult and a little like the good Lord.’

Pissarro was clearly a natural teacher and valued champion of others, famously persuading Gauguin to give up being a stockbroker and devote himself to art. All five of Pissarro’s sons became painters, much to their mother’s despair. But he was also a willing pupil and happy to learn from others. In 1885 Pissarro met his son Lucien’s friends, Georges Seurat and Paul Signac. He was immediately interested in their experiments inspired by contemporary ideas on ‘colour theory’. The artists built their pictures by applying paint in small dots of complementary colours, creating a shimmering, luminous effect. Together with Lucien and the younger painters, Pissarro showed his ‘pointillist’ works in a separate room in the final Impressionist exhibition in 1886. A sympathetic critic called the new technique ‘Neo-Impressionism’ – a natural development from Impressionist spontaneity towards a more considered and permanent art. However, the new technique was extremely time consuming and Pissarro’s output plummeted while his dealers found it difficult to sell these pictures. Perhaps as compensation, he turned again to watercolour, making freely painted landscapes in saturated washes, not as preparatory studies but as works in themselves.

Having definitively abandoned the dot technique in 1890, Pissarro began to enjoy commercial success, working in a more painterly style. Following Monet’s example, he also began to paint in series, notably townscapes in Paris and harbour scenes in Rouen, Le Havre, and Dieppe. A recurring eye infection forced him to paint indoors, looking through the windows of rented apartments and hotel rooms. 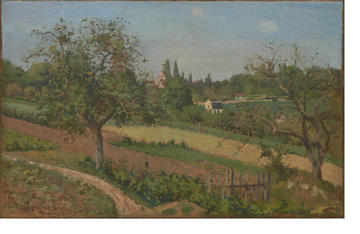 The exhibition will feature major works from across Pissarro’s career, punctuated by paintings and drawings by the artists closest to him, demonstrating his influence on the Impressionists and dynamic relationships with younger artists. On show for the first time in the UK will be Pissarro’s The Countryside near Louveciennes, Summer (1870, private collection); and Cézanne’s La Vallée de l’Oise (c. 1880, private collection), an example of Pissarro’s impact on even Cézanne’s singular vision. Other highlights are works by Gauguin where he has taken on board Pissarro’s advice to adopt a lighter palette and luminous composition. It also includes Pissarro’s moving 1874 portrait of his daughter Jeanne-Rachel (Minette) who died just before her ninth birthday. She is shown in the last stages of her illness, a fever, with her hair cropped short to relieve her symptoms. The picture was never finished.

On 24 May 2022, the new event-cinema film, Pissarro: Father of Impressionism will open in UK screens and locations across the world, produced by Phil Grabsky’s critically acclaimed company, Exhibition on Screen, and directed by award-winning film-maker, David Bickerstaff. Shot on location in France, with exclusive access to the exhibition and the Ashmolean’s Pissarro archive, the film includes interviews with leading experts and curators, exploring in detail Camille Pissarro’s fascinating life and career.

Exhibition curator, Colin Harrison, says: ‘Camille Pissarro is unique among the Impressionists. His work rewards close and careful attention that reveals a hugely sympathetic and humane artist. Unlike his contemporaries, he never compromised for the market; he was willing to learn and experiment; but was always devoted to painting the "sensation. Consequently he is the most sincere and authentic of all the Impressionists and his influence on his own and succeeding generations of artists is impossible to quantify.’

PRESS IMAGES
Images for editorial use are available to download at: https://go.glam.ox.ac.uk/pissarro

The exhibition is organised in collaboration with Kunstmuseum, Basel.

The exhibition is supported by:
Mr Barrie and Mrs Deedee Wigmore
The Ruth Stanton Foundation
The Huo Family Foundation

The exhibition is sponsored by:
Stern Pissarro Gallery
The Pissarro Exhibition Supporters Circle
Robert Lehman Foundation
In memory of Charles Young
The Patrons of the Ashmolean

With special thanks to: