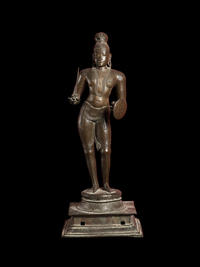 In November 2019, an independent scholar brought new research to our attention relating to the provenance of an Indian 16th-century bronze of Saint Tirumankai Alvar which was acquired by the Ashmolean at Sothebys in 1967.  Research in the photo archives of the Institut Français de Pondichery and the Ecole française d’Extrême Orient (IFP-EFEO) appears to show the same bronze in the temple of Shri Soundarrajaperumal Kovil in Tamil Nadu in 1957.  The Ashmolean was informed that the bronze is one of a number of objects in collections in Europe and the United States identified by this researcher through the IFP-EFEO archive.

Although there was no claim against the object, the Museum brought the matter to the attention of the Indian High Commission on 16 December 2019, requesting any further information (including possible police records) that would help establish the object’s provenance; and noting that we were open to holding discussions about the possible repatriation of the sculpture. The Indian High Commissioner acknowledged our letter on 24 December 2019 and informed us that the matter and the information we provided had been forwarded to the Indian authorities; and expressed appreciation that the University of Oxford and the Ashmolean had been proactive in this matter.

The Museum received a formal claim for the bronze from the Indian High Commissioner on 3 March 2020.  In order to complete ‘due-diligence’ investigations and build a more accurate provenance for the object, a member of Ashmolean staff planned to visit India in May 2020, but this was postponed by the pandemic.  The journey took place in July 2022 when the Ashmolean’s Curator of Indian Art met police officers from the Idol Wing and senior officials of the Archaeological Survey of India (ASI), the French Institute, Shri Nagaswamy Temple (Icon Centre), and Shri Soundararaja Perumal Temple.  ASI officials asked the Museum to undertake metal analysis of the bronze, which has been submitted to the ASI who will, in turn, complete a report on the object and its known provenance.

The Ashmolean now awaits the final report from the ASI, after which the claim will be submitted for consideration to the Museum’s Board of Visitors (trustees).  The final decision on the return of the object resides with the Vice-Chancellor of the University of Oxford, under the University’s Procedures for the Return of Cultural Objects.

The Museum acquired the statue in good faith in 1967.  According to the Sotheby’s catalogue, the bronze was sold by the private collector, Dr J R Belmont (1886-1981).  We currently have no indication of how the bronze entered his collection and we continue to investigate the provenance with the support of the Indian High Commission.

Further updates on this case will be published online at www.ashmolean.org/press