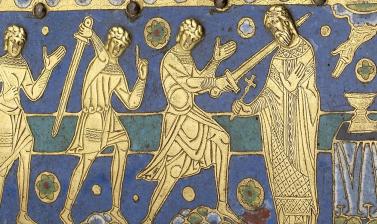 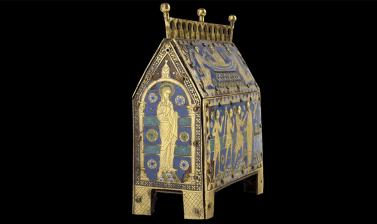 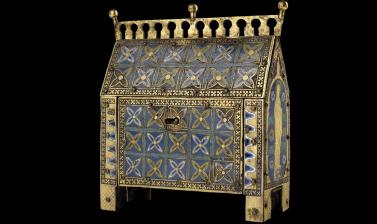 Born in 1118, Thomas Becket rose to high office helped by his friendship with Henry II, the young King of England. He was appointed Archbishop of Canterbury in 1162. Once he became Archbishop, however, relations with Henry deteriorated, culminating in the murder of Thomas in Canterbury Cathedral by four of the King’s knights on 29 December 1170. The news of his death shocked the Christian world. Miracles were reported at his tomb and he was pronounced a martyr and canonised in 1173. Relics of Becket were much in demand and were often housed in elaborate caskets like this example.

Decorated with champlevé enamel and made from gilt copper, this casket was produced in Limoges, France. Formed from powdered coloured glass, usually bound with oil, molten enamel was poured into engraved sunken fields and the surrounding material polished down when cool. On the front of the casket is the martyrdom of St Thomas Becket. Three of the four knights are pictured, each with their weapons raised, ready to strike Becket. Behind the Archbishop we see the altar and the hand of God appearing from the heavens. Pictured above is the burial of Becket; his body, wrapped in cloth, is being placed in a highly decorative tomb.

Becket’s shrine at Canterbury Cathedral was one of the most famous in the Christian world until its total destruction in 1538 on the orders of King Henry VIII. It is likely that the saint’s bones were enshrined within a gabled chest, a design echoed in this colourful reliquary.