ST JEROME IN HIS STUDY

A master engraving by the master of printmaking 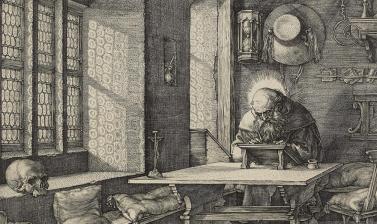 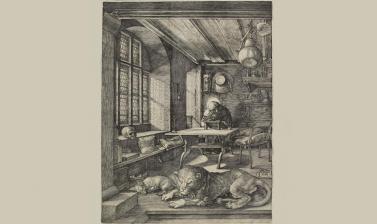 Albrecht Dürer (1471–1528) was born in Nuremberg. He emerged as a brilliant painter, draughtsman and writer, though his greatest impact was in the medium of printmaking, elevating it to the level of an independent art form. In 1514–15 Dürer was at the height of his powers, working for the Holy Roman Emperor, Maximilian I, and creating his unsurpassed so-called ‘Master Engravings’, including this one, St Jerome in his Study.

Jerome was a 5th-century priest best known for his translation of the Bible into Latin and one of the four Church Fathers. His scholarly activities led to him becoming in the early 16th century the patron saint of humanists, who were studying the original Greek and Hebrew texts of the Bible. Erasmus of Rotterdam was one such scholar, publishing his nine-volume edition of Jerome’s works in 1519. Dürer had close friends and patrons among this humanist network and by presenting Jerome in his study, rather than in his other popular guise as a penitent hermit in the wilderness, he sought to capitalise on the saint's learned associations.

Jerome is shown with his traditional attributes: a crucifix, a skull symbolising mortality, the lion from whose paw he had removed a thorn and a cardinal’s hat denoting his service to the Church. The composition is unusual in relegating Jerome to the back of the space, but this only serves to emphasise his absolute concentration on his work, oblivious to the furnishings of his study that Dürer has realised in astonishing detail.

Find out more about our Western Art print room