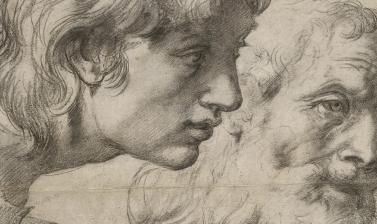 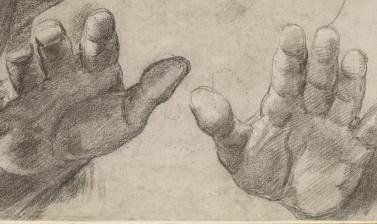 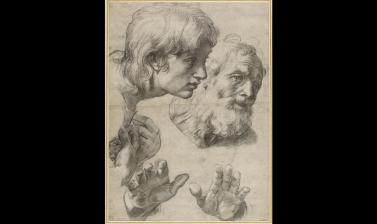 Raphael was probably the greatest draughtsman in the history of European art. He was born in Urbino where his father, Giovanni Santi, was a court painter. From 1500 – when he became an independent master – he worked throughout central Italy, particularly Florence. In 1508, at the age of 25, Raphael was called to the court of Pope Julius II to help with the redecoration of the papal apartments and he remained in Rome for the rest of his short life.

This preparatory study for the Transfiguration altarpiece in the Vatican of 1518–20 is without doubt his greatest drawing. A sublime work of art, it shows the artist’s renowned powers of expression at their height and reveals his technical virtuosity. The reactions and emotions of two contrasting figures – an elderly man and beautiful youth – are explored with sensitivity and profound insight. Raphael’s mastery of the tonal range of black chalk meant that he could anticipate here the treatment of colour as well as light and shade in the final painting. By this stage, the design had been finalised and a full-size line drawing, a blueprint of the composition, had been prepared. The dotted marks on this sheet reveal that outlines of the heads and hands were transferred from this full-scale drawing, so that Raphael could focus effortlessly on these crucial elements.

Raphael gave detailed attention to the Transfiguration, which was just completed by the time of his death. His success in depicting conflicting emotions in the painting relied on the subtleties of characterisation and expression achieved in drawings such as this one.

Find out more about our Western Art print room