Exploring the meaning of coin hoarding in early Britain 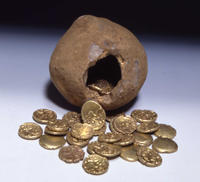 Iron Age coins are still poorly understood: they combine aspects of money as they have standardized weight and metal composition; they exhibit complex and localized iconography; they are deposited in a careful ways, probably as part of a broad ‘sacrificial’ economy. This project examines this last aspect, focusing on hoards deposited in a time of major cultural change, the late Iron Age (“Celtic”) to Roman transition in Britain.

The Iron Age in Britain is a period of social change, as clearly evidenced in alterations in technologies and material culture. This is also the period in which the first coins appear, imported from Gallic neighbours across the Channel, and later minted locally across southern Britain. Coins form a major source of information on late Iron Age society, trade, religious beliefs, and continental contacts. Unfortunately, the coins have often been neglected in other studies of Iron Age material culture. The Roman period brought significant, and in some cases rapid, change. The two periods are generally studied by different specialists, obscuring continuities and the process of change. This project seeks to bridge these subject divisions to shed new light on the transition from Iron Age to Roman through a study of hoarding. Hoards of coins are found in Britain in quantity from the later 2nd century BC onwards. The main focus will be on the period from c. 80 BC to AD 100, but earlier hoards will be considered as a background to hoarding/deposition in Iron Age Britain prior to Roman influence.

The project will address major historical questions. These include the extent to which hoarding can illuminate:

The Coin Hoards of the Roman Empire Project will provide an online vehicle for gathering and analysing hoard data, and the Celtic Coin Index, for which a new digital platform is being created, will provide a linked-open-data classification for the coinage to facilitate analysis and data on single finds for comparison. Data will also be drawn from the online database of the Portable Antiquities Scheme.