An exploration of the lustreware ceramic technique through the ages

A look at any display of lustreware could at first prove an underwhelming experience: rows of plates and bowls with dense surface decoration in shades of orange and brown. And yet, when examined more closely, a kind of magic happens.

The painted surface begins to shimmer, sending off gleams of bronze and gold. In this saucer from 10th century Iraq, the fine arching feathers of an elegant cockerel seem to move in the play of light caused by lustre’s metallic sheen, and the stippled background and patterns, covering the whole surface of the plate, become dynamic abstract designs (Fig.1). 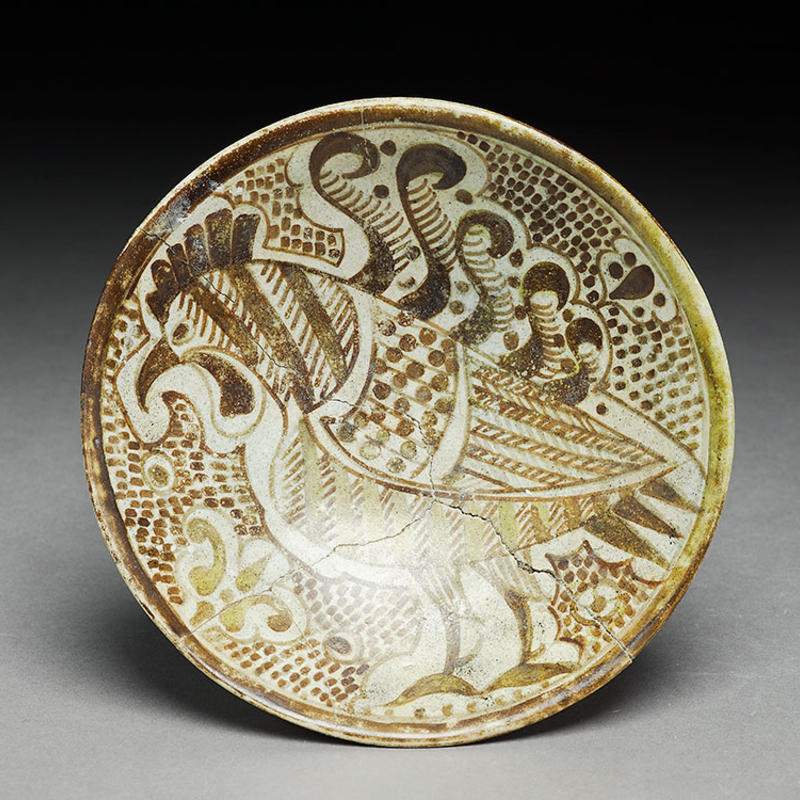 The story of lustreware – ceramic painted with an iridescent metallic pigment over the glaze – is one of ancient origins, secrecy and global triumph that continues to this day. Initially used to decorate glass (Fig. 2), lustre was first applied to tin-glazed earthenware in 10th-century Iraq under the Abbasid caliphs (750–1256).

Under their patronage ceramics decorated in this technique came to signal refinement and regal authority. Courtly activities and entertainment - drinking, dining and music paramount amongst them – came to dominate their decoration (Fig. 3). Over time, abstract designs and elegant inscriptions would come to take an equally prominent place, further enriching lustreware’s visual repertoire. 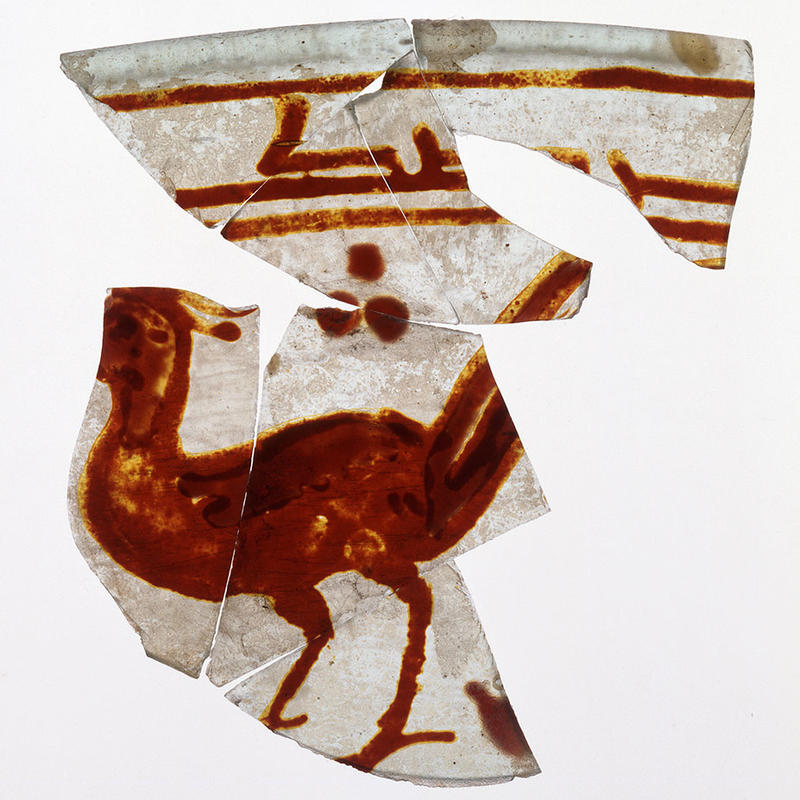 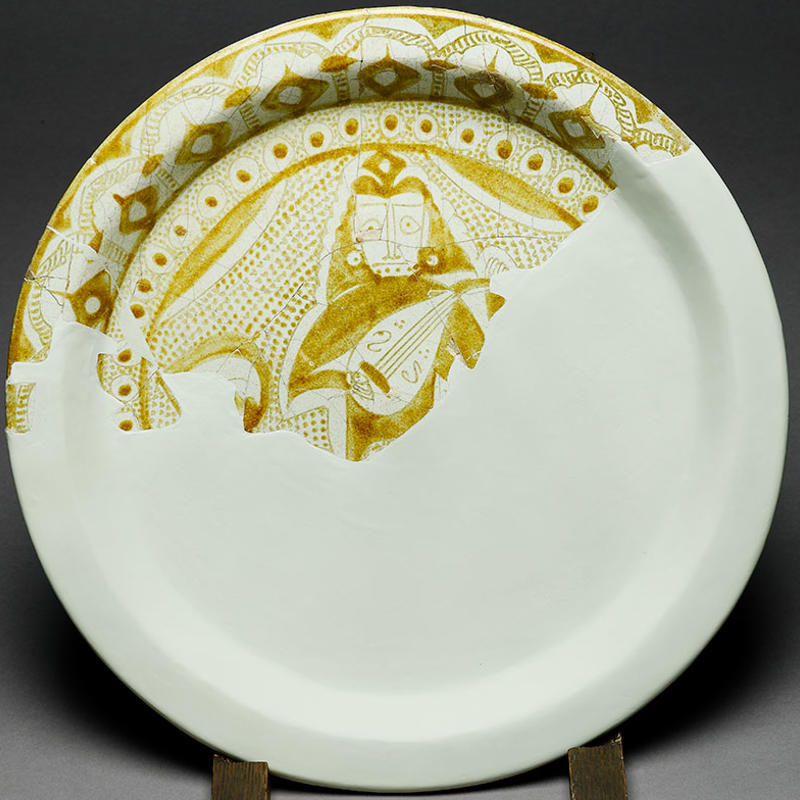 How to achieve the lustre technique is not readily discoverable from the finished works themselves, however, and its recipe and methods were a jealously guarded secret. Indeed, some early potters thought it a kind of alchemy because it used silver and copper pigments to make a paint that looked like gold.

Around 1300, Abu’l Qasim, a Persian historian from a family of distinguished potters, produced a written record of the process by which metallic oxides are first mixed to a liquid solution and are then applied to objects which are then fired a second time in an oxygen-free kiln. “When they are cold,” he notes in his account, “take them out and rub them with damp earth so the color of gold comes out…That which has been evenly fired reflects like red gold and shines like the light of the sun.”

The whole experience can be witnessed in this video, realized for the new Albukhary Gallery of the Islamic World at the British Museum: 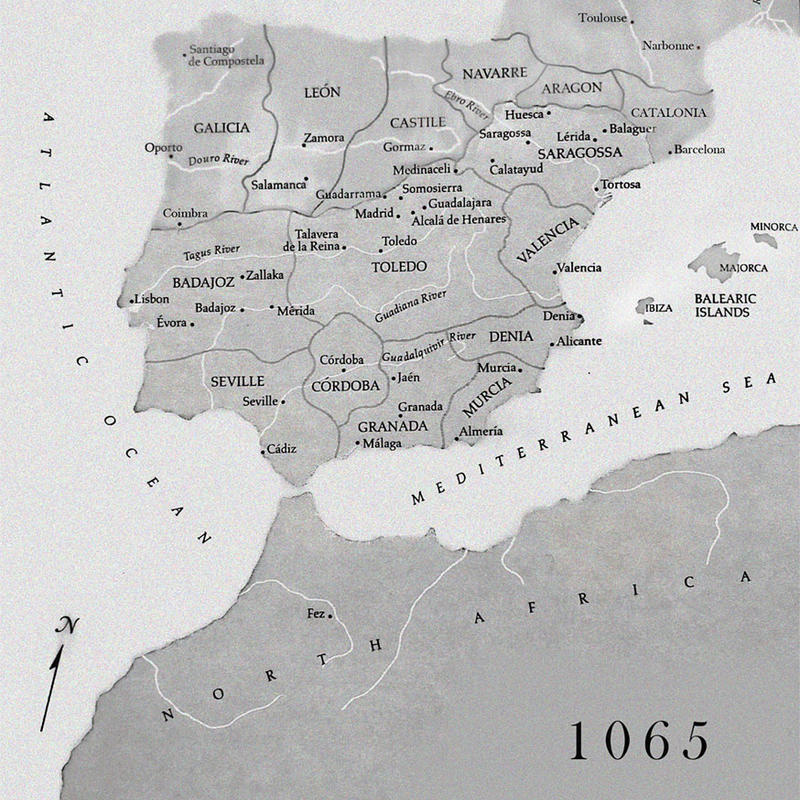 Following the movement of objects and artisans, lustreware spread to other parts of the Islamic caliphate, from Iran in the east, to Egypt and North Africa in the west, reaching as far as the Iberian Peninsula. Here, in the 11th century, lustreware would become one of many luxury arts that established the opulent refinement of local Islamic elites. Its manufacture continued as a court art under the rule of the Almoravids (1040-1147), Almohads (1121-1269) and others through the 12th and 13th centuries.

By the 14th century, Christian kingdoms like Castile and Aragon had increased their territories, widening and consolidating Christian control of the region. But the last Muslim principality on the Iberian Peninsula, the small Nasrid kingdom of Granada (1232-1492), though not politically powerful, continued to wield great cultural prestige. The Nasrids were especially known for their fabulous lustreware, a hallmark of the opulent décor of their famed Alhambra palace and a coveted product across Europe (Figs. 6-7). 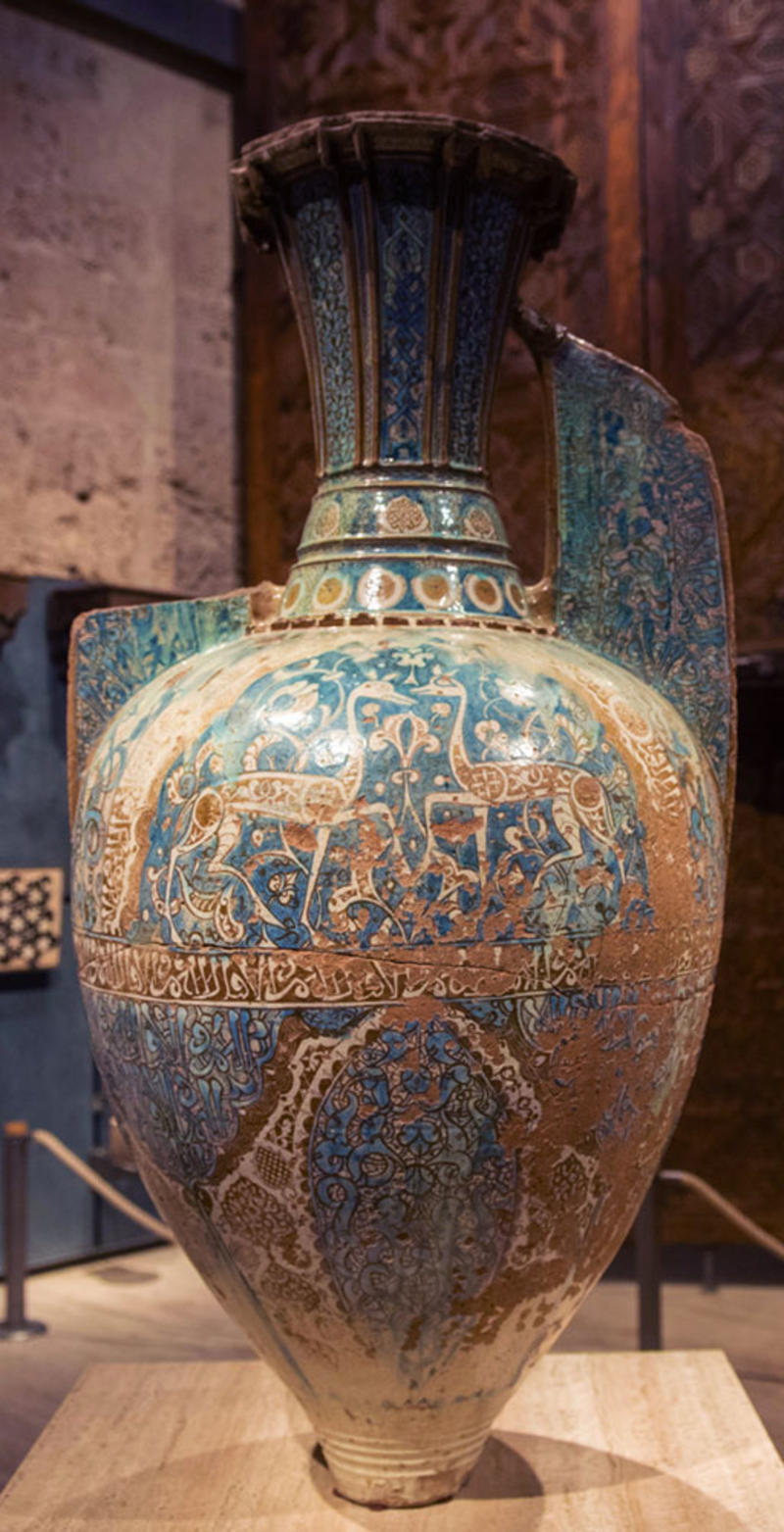 Fig.7 Alhambra Vase, Malaga,14th-15th century, Courtesy of the Museo de Arte Hispanomusulman, Granada, inv. no. 290. “Behold the Vase standing at its door”, one inscription from the Alhambra declares, “it will seem like a valiant Sultan, sitting on his throne.” 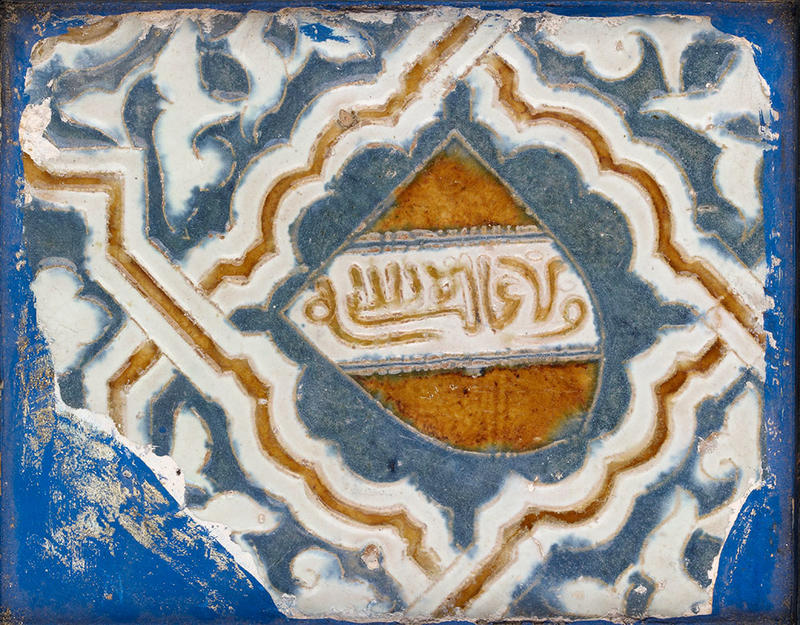 In his travel memoirs, the contemporary North-African traveller Ibn Battutah remarked that the city of Maliqah (Malaga) produced “wonderful gilded pottery that is exported to the remotest countries” thanks to the vast mercantile networks of Genoese, Jewish, Portuguese and Catalan traders that at this time reached far beyond the Mediterranean (Fig. 8). Indeed, in 1303 examples of “Malaga earthenware” were recorded in a shipment to the port of Sandwich, in Kent. 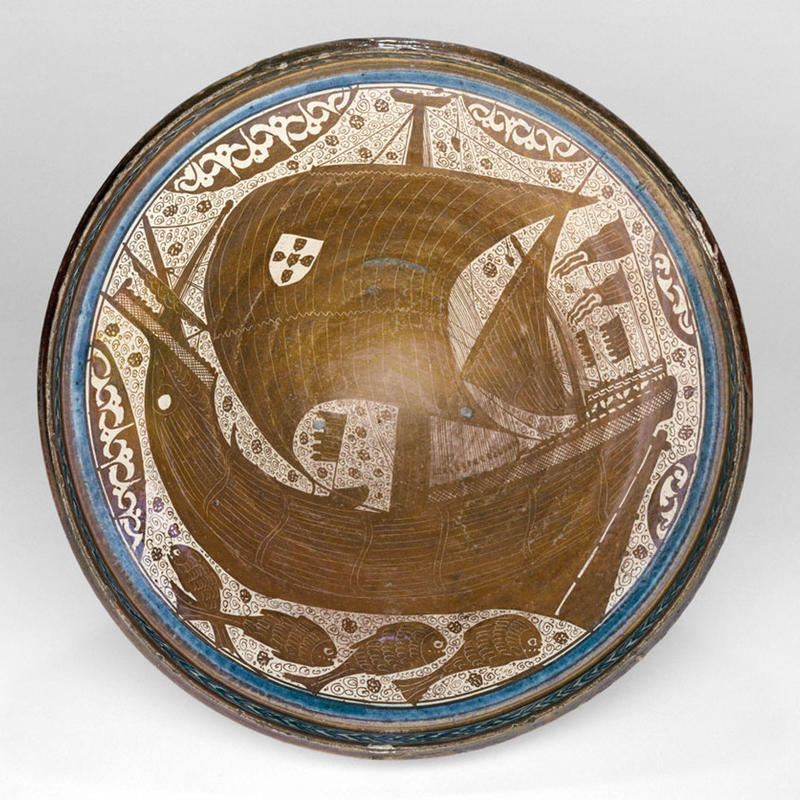 IS IT MUSLIM? IS IT CHRISTIAN? DOES IT MATTER?

By the 15th century Christian rulers dominated most of the peninsula. Pedro Ruyl, Lord of Manises, had been ambassador to the Nasrid court of Granada and is credited with bringing lustreware potters north to market their wares to the aristocratic market in the Kingdom of Valencia. Though many of the potters active in these centres were Muslims, there were likely also Christian and Jewish craftsmen working alongside them, absorbing their centuries-old knowledge and expertise.

This chapter of the history of lustreware has often been explained in terms of religion. Lustre objects produced at this time are therefore often labelled “Hispano-Moresque” clearly associating them with Muslims. Yet religion is really not a factor here. One might call Iberian lustreware “transcultural” instead: an artistic tradition that transcends political and religious affiliations and rather represents a shared taste and culture.

A poignant example of this taste shared across religious groups is this Seder plate, made in Valencia around 1480, only a dozen years before the expulsion of the Jews from Spain. It features the complex abstract designs and circling inscription - in this case in Hebrew- typical of traditional Islamic lustreware (Fig. 9).

The designs on 14th through 16th century Spanish lustre bowls continued to combine new and traditional motifs. Lustreware from Manises is at times so similar to works of Nasrid manufacture that it is still difficult to tell the difference today (Fig. 10).

In a basin from Valencia, a stylized Latin inscription, “Arise, Lord, to deliver us, Arise” is used as a frieze on the vessel’s rim much as Arabic inscriptions were in classical Syrian or Persian lustreware (Figs. 11-12). The letters are stylized and almost hidden in intricate layers of entangled foliage - like a puzzle to be deciphered - characteristics of the earliest lustrewares. 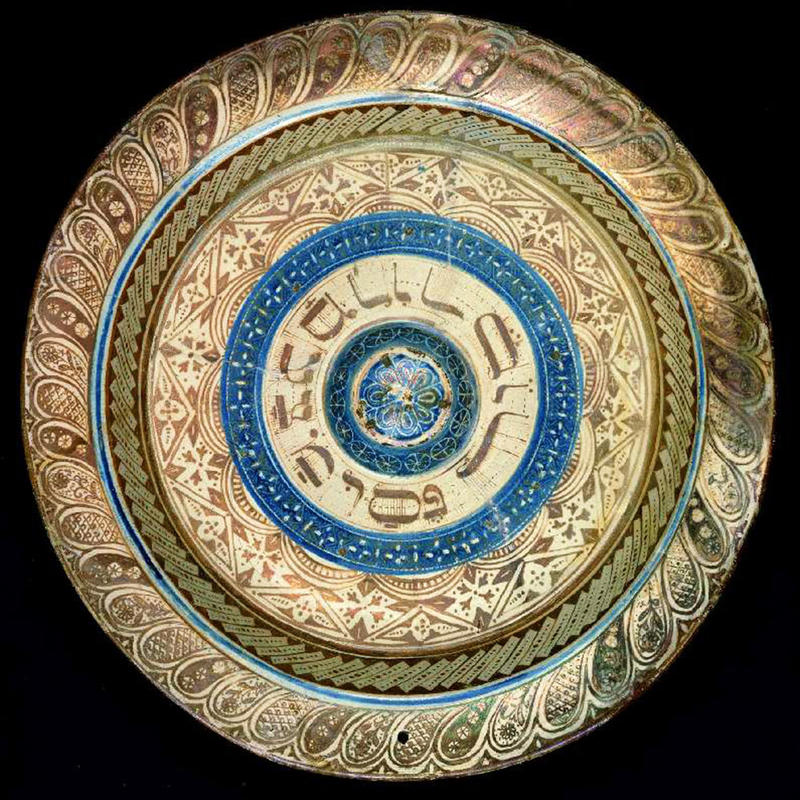 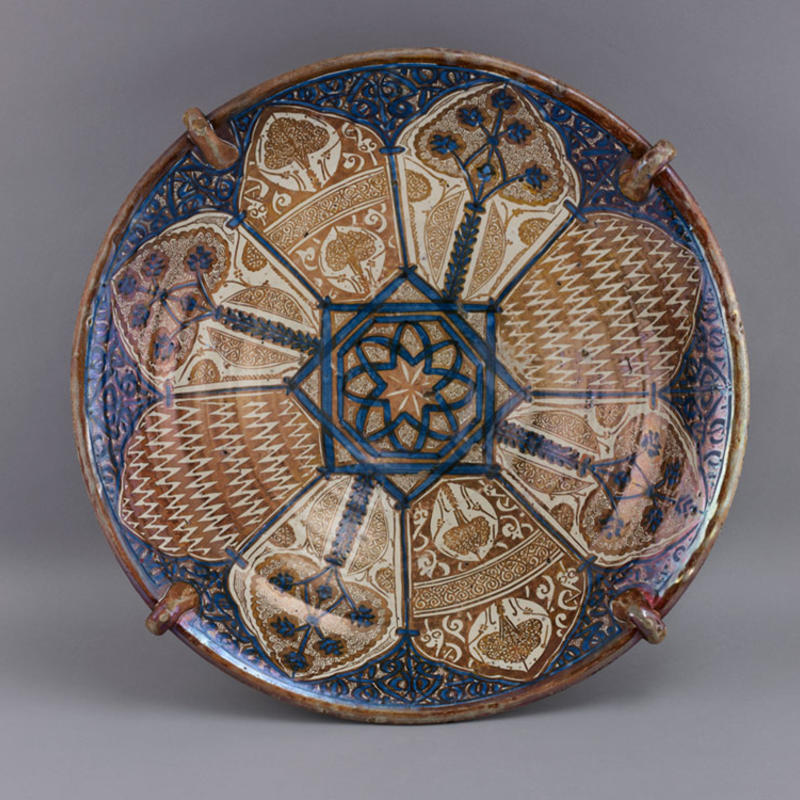 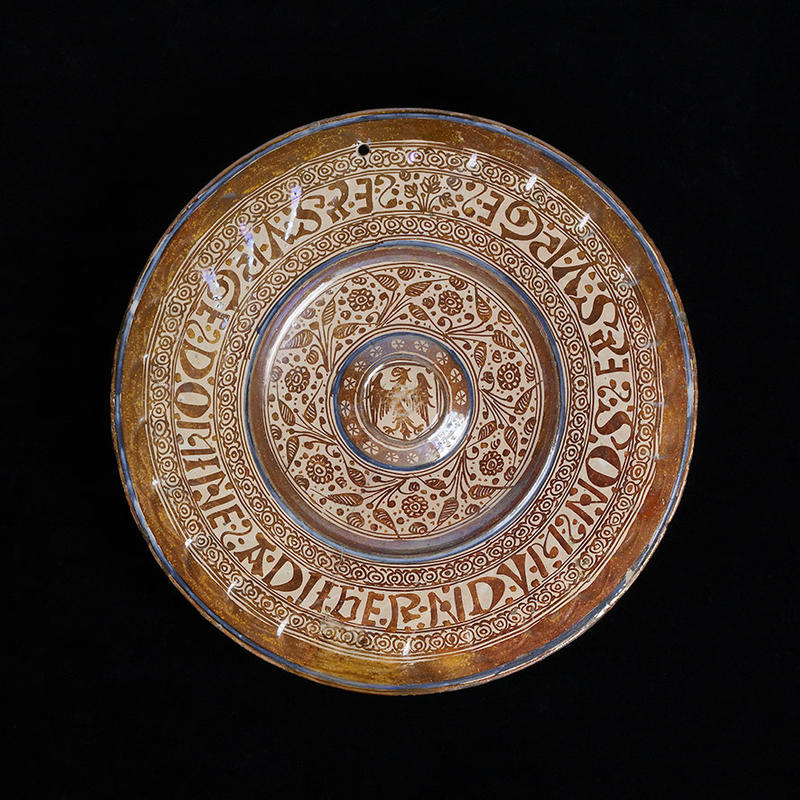 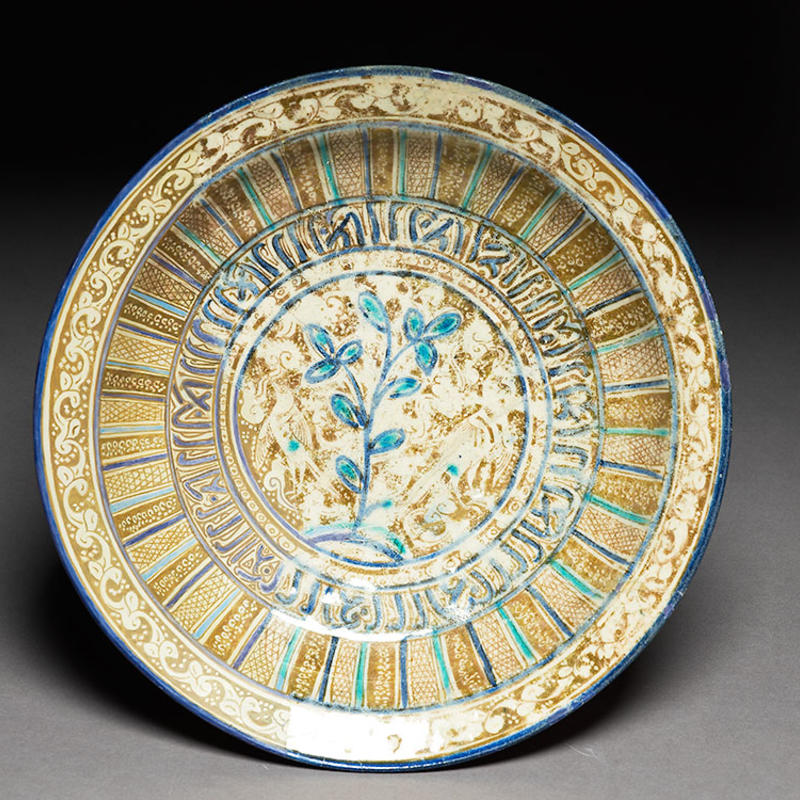 The arms of the Christian Kingdom of Castille in the centre of this other dish are embraced by a tangle of elegant abstracted foliage echoing earlier Islamic counterparts and showing how lustreware by then had become part of Spanish elite taste (Fig. 13). Indeed, Isabel ‘The Catholic’, Queen of Castille and soon Queen of all Spain, made several orders of pottery from the Lord of Manises in 1455 writing that “for the use and service of our person we require some Malaga ware” emphasizing that it must be “glazed and lustred inside and out.”

In 1492, Isabella of Castille and Ferdinand of Aragon united their realms, and conquered the Kingdom of Granada, the last Islamic kingdom on the Iberian Peninsula. The 15th and 16th centuries, when so many of these works were made, were enormously oppressive times for the Muslims and Jews of Spain. And yet despite anguishing religious and cultural division, lustreware continued to be produced, bearing witness to a shared culture that could not be erased. 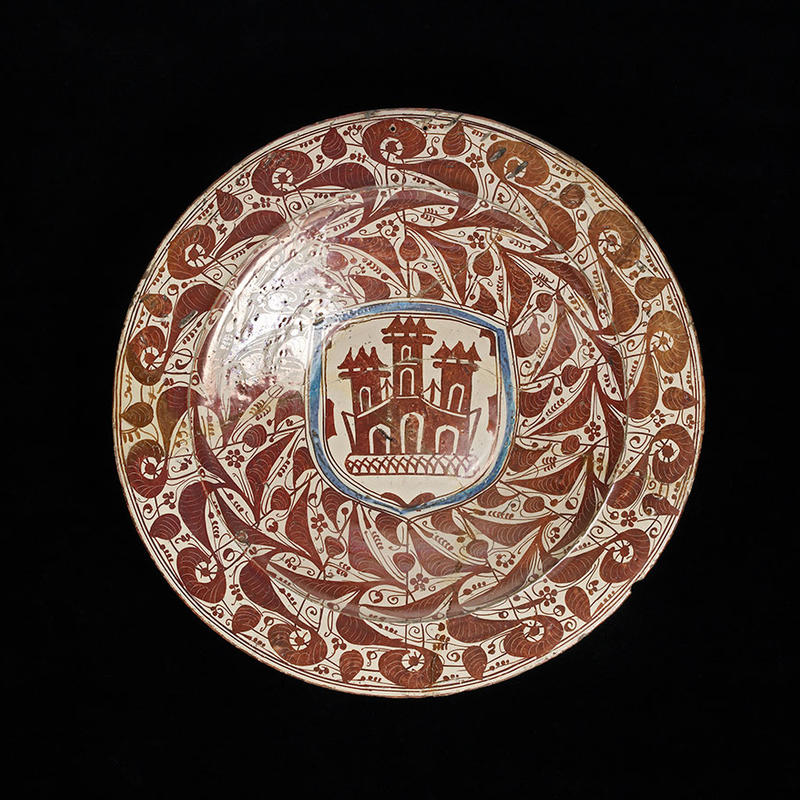