DIVINATION AND ART IN THE ISLAMIC WORLD

DIVINATION AND ART IN THE ISLAMIC WORLD 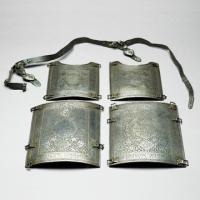 Within Islamic societies, people of all backgrounds have engaged in fascinating yet controversial practices such as the casting of horoscopes and interpretation of omens. From humble hard stone amulets inscribed with pious invocations to elaborate talismanic shirts designed to be worn in battle, there is a wealth of material culture providing evidence for the use of practices calling for supernatural assistance and protection. This project seeks to examine the material evidence. It will take a new approach to the study of divinatory practices and their cultural significance, by placing objects at the centre of the discussion in order to provide fresh insights into the nature of these arts and their role in Islam's pre-modern cultural landscape.

Combining the study of an extensive selection of material evidence with an examination of complementary textual sources, this project seeks to answer the following questions:

The project will investigate the extent to which divinatory arts have been embraced and condemned within Islam through the centuries. It will examine their relationship to the Islamic worldview and explore how these arts – including astrology, dream interpretation, bibliomancy and geomancy – could be reconciled, in some instances, with an Islamic perspective o the world. These practices have been marginalised over time and yet they are an important part of Islamic history. Through an examination of their role and influence, this project will seek to provide new insights that will inform current debates and contribute to a better understanding of Islam and its complexity.

This project has involved research into the following collections:

Leoni, F. Session 'Occultism and the Museum: The Case of Power and Protection: Islamic Art and the Supernatural' at 'Curating Islamic Collections Worldwide'. 23rd–24th February 2017. Manchester Museum, University of Manchester.

Yahya, F. Session ‘Calligrams of the Lion of ‘Ali in Southeast Asia’ at the 'Islamic Occultism in Theory and Practice' Conference. 6th–8th January 2017. Ashmolean Museum, University of Oxford.

Yahya, F. Session 'Malay Paper Wheels with Strings Used for Divination' at the 'Manuscripts as Magical Agents' Workshop. 10th–11th July 2016. Centre for the Study of Manuscript Cultures, University of Hamburg.

Leoni, F. Workshop 'The Enigma of an Ottoman Talisman'. 20th May 2016. University of Oxford.

Yahya, F. Workshop ‘Diviners and Healers in Southeast Asia’ at the ‘Divination and Art in the Islamic World' Workshop. 15th January 2016. Ashmolean Museum, University of Oxford.

Yahya, F. (2019 forthcoming). “Calligrams of the Lion of ‘Ali in Southeast Asia” in ‘Islamic Occultism in Theory and Practice: Proceedings of the Conference Held in Oxford, 6-8 January 2017’. Leiden, Brill.