THE HUNT IN THE FOREST 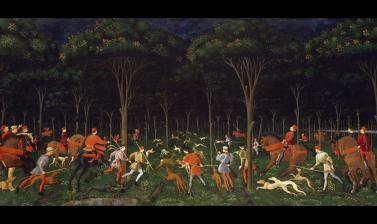 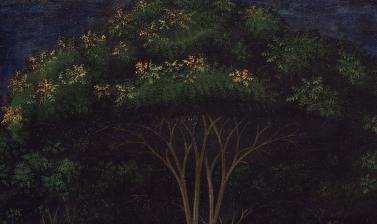 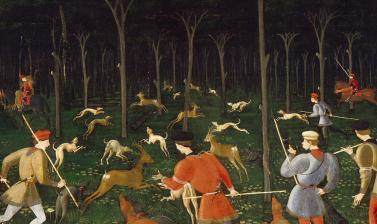 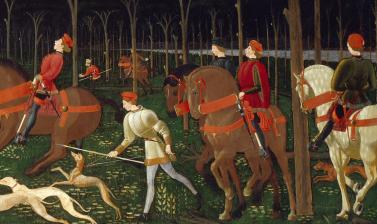 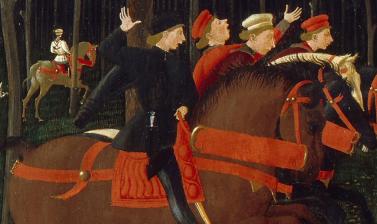 Paolo di Dono was celebrated in his lifetime as a master of perspective, and of animals and landscape; his nickname, Uccello (‘Bird’), alludes to his depictions of the natural world. He was a versatile designer, working at times on mosaic and stained glass commissions and all of these interests are fused in this masterpiece.

As a nocturnal landscape and as a brilliantly structured composition, The Hunt is a highly original painting. In its size and shape it is a spalliera painting, to be viewed at shoulder height – whether as a backboard of a decorated chest or set in the panelling of a room. The original client is unknown, but the painting was clearly intended for a luxurious domestic setting, perhaps in Urbino where Uccello worked for a time from 1465, or in Florence about 1470. Gold flecks in the foliage of the trees would have complemented the bright colours of the figures against the dark forest, making the painting even more beautiful when viewed by candlelight.

Hunting was an aristocratic pastime with its own rituals (the crescent moon, symbol of Diana, the chaste goddess of the hunt, appears in the horses' trappings) and the idea of a hunt by night is playful or symbolic rather than realistic. Uccello mapped out a grid on the panel's surface, fixing a central vanishing point. The devices of the huntsmen's spears, the cut branches and logs and the area of water denote this coherent space, inhabited by the receding forms of men and animals; our gaze is drawn deep into the forest.

How quickly can you solve it?

Browse our range of books and gifts unspired by the collections