An octopus at home in a palace 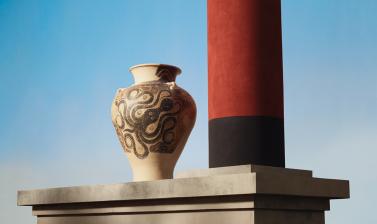 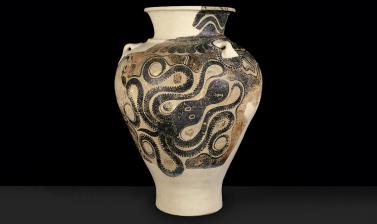 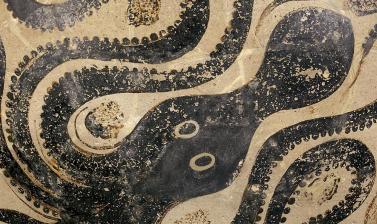 Standing at an impressive 75 centimetres, this three-handled jar depicts an octopus with six arms swimming in an abstract seascape. It was presented to the Ashmolean in 1911 by the government of Crete through Sir Arthur Evans, Keeper of the Ashmolean from 1884 to 1908. The jar comes from the palace that Evans had excavated at Knossos and belongs to a culture he called Minoan, after the legendary King Minos.

In the centuries after 1900 BC, Minoan civilization reached the height of its prosperity and influence and major palaces were built at Knossos and Mallia in the northern part of Crete, at Phaistos in the south, and at Zakros in the east. After 1500 BC, however, there was increasing influence from the Mycenaean culture of the Greek mainland and, around 1450 BC, widespread destruction on the island. Whether this was caused by invading Mycenaean warriors is unknown, but Greek influence on Crete certainly becomes even more pronounced.

Pottery from the period following the destruction shows a blend of Minoan and Mycenaean stylistic traits. The shape of this jar is typically Mycenaean and, because the contents of such vessels – oil, wine and other commodities – were in much demand, examples have been found widely. An octopus had been a popular motif on Minoan pottery where animals were depicted with an extraordinary accuracy that came from a close observation of nature. The Mycenaean approach, however, was – as here – to take naturalistic motifs and abstract them, eventually to the point at which they are almost unrecognisable.

Discover the Heroes of Ancient Greece with your family

Shop for framed or unframed prints from the collection