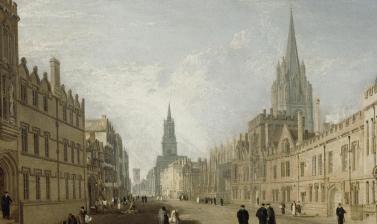 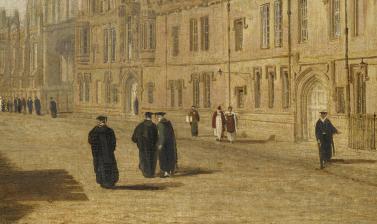 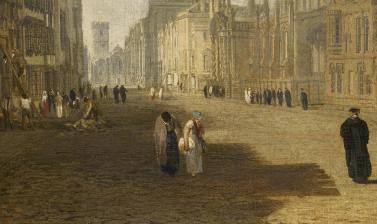 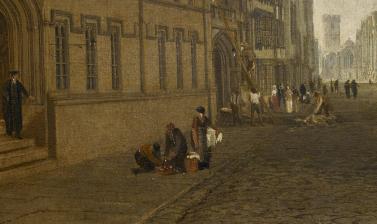 Acknowledged as one of the greatest landscape artists of all time, Turner (1775–1851) knew Oxford extremely well and, from childhood, made numerous drawings of the streets and colleges and the picturesque views surrounding the city. One his most important early commissions was for two watercolours to be engraved for the Oxford Almanack, the annual calendar published by the University Press. They were so successful that he eventually completed ten watercolours between 1798 and 1804, and later painted two oils for the local print-seller and frame-maker, James Wyatt, including the celebrated High Street, Oxford (1810).

The painting is one of the most fully documented of all Turner’s works because Wyatt kept his correspondence with the artist which was included in his posthumous sale. The original purpose of the commission was to have the design engraved. Wyatt settled on an oil painting, instead of a watercolour, half the size of Turner’s normal canvases, at a cost of 100 guineas. The artist worked on the painting over the winter of 1809–10, consulting Wyatt on the details of the architecture included in the view. The final stage involved the introduction of figures, members of the University and clergy, and some women ‘for the sake of colour’. The painting was exhibited at the Royal Academy in 1812. When, in the 1830s, Turner was choosing views of Oxford for his greatest series of watercolours, he rejected the High Street. He felt that in this painting he had achieved an unparalleled view of technical mastery that he could not repeat.

How quickly can you solve it?