Exploring what happened to colour in the 19th century 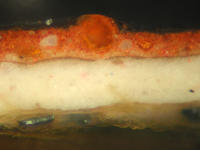 Chromotope explores what happened to colour in the 19th century, and notably how the ‘chromatic turn’ of the 1850s mapped out new ways of thinking about colour in literature, art, science and technology throughout Europe. This project will lead to a major exhibition on Victorian colour which will open at the Ashmolean Museum in 2023. One of the key art works of this show will be the Great Bookcase in the Ashmolean which was designed by the chromophile William Burges for the 1862 London International Exhibition and on which the conservation teams at the Ashmolean will carry out a full pigment analysis. 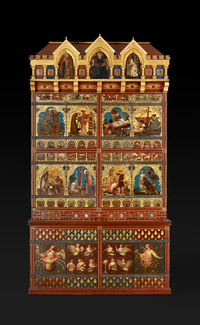 Britain’s industrial supremacy during the Victorian era is often perceived through the darkening filter of coal pollution, and yet the industrial revolution transformed colour thanks to a number of innovations like the invention in 1856 of the first aniline dye. Colour thus became a major signifier of the modern, generating new discourses on its production and perception.

This Victorian ‘colour revolution’, which has never been approached from a cross-disciplinary perspective, came to prominence during the 1862 International Exhibition – a forgotten, and yet key, chromatic event which forced poets and artists like Ruskin, Morris and Burges to think anew about the materiality of colour. Rebelling against the bleakness of the industrial present, they invited their contemporaries to learn from the ‘sacred’ colours of the past – a ‘colour pedagogy’ which later shaped the European arts and crafts movement

Building on a pioneering methodology, and a multi-institutional partnership (Sorbonne Université and Oxford University, with the support of the CNAM), CHROMOTOPE therefore brings together literature, visual culture, the history of sciences and techniques and the chemistry of pigments and dyes, in order to offer new, invaluable insight into hitherto neglected aspects of 19th century European cultural history.

This project has received funding from the European Research Council (ERC) under the European Union’s Horizon 2020 research and innovation programme (grant agreement No. 818563 - CHROMOTOPE)